This tribe is composed of scientists and magicians of every race fascinated by the goo. Urged by some morbid fascination, they spend their time studying the vile substance and its effects on the flora, fauna and homins. They endeavour to link the goo to magic in the hope of acquiring more and more power. They have thus made groundbreaking discoveries which they jealously keep secret, only giving snippets of knowledge to their disciples and allies, such as the tribe of the Darkening Sap. The tribe also excerces pressure on governments for goo study to be accepted so they can lawfully use the goo all over the planet without restraint.

This was shortly after Mabreka became leader of the Zoraï. For a tribe that was founded so recently, the Black Circle seems to have gained impressive influence. So either they rose to power very quickly, or more likely, they had existed in the shadows since long before, only making their activity known since 2507.

The Black Circle Coat of Arms 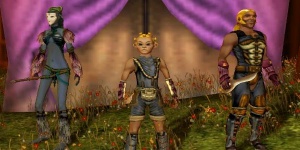