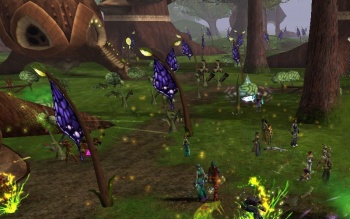 In the summer of the third cycle of Jena Year 2549, the renowned Matis botanist, Cuiccio Perinia, planned to present a new botanical creation in Yrkanis to honour Queen Lea Lenardi. His creation backfired due to a mistake and saw Yrkanis overrun by dangerous plants. Cuiccio Perinia only managed to present his creation correctly almost a full cycle later.

Cuiccio Perinia blamed the mistake on his assistant botanist, though some tongues whispered it had been his own fault. Whichever the case, the aggressive plants that were spawned by the failed attempt made many casualties in Yrkanis, and homins had to battle the plants through the streets of the city.

Volunteers then had to help gather the materials needed for a second attempt before Cuiccio Perinia could finally present his creation in the spring of the fourth cycle.

Cuiccio Perinia will present his newest botanical creation in honor of Queen Lea.

Preperations start at 2h on Quinteth, Medis 17, 3rd AC 2549(JY) at the Royal Conservatory in Yrkanis. 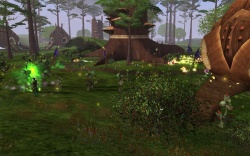 A crowd gathered at the Royal Conservatory in Yrkanis to watch the presentation of Cuiccio Perinia's creation. Cuiccio Perinia welcomed the crowd and once his assistant had brought him the required materials, the two of them took a stroll through Yrkanis sprinkling seeds and growth potion throughout the streets. After that the assembled crowd returned to the conservatory to await the results.

It didn't take long. Within moments hundreds of dangerous, intelligent plants had spawned all over the city. Moments later they started attacking people. The assembled crowd had not come prepared for a battle, and dozens of them were slaughtered. But fortunately there were enough homins there that they managed to recover, and together with the city guards they slowly eradicated all the plants .

Cuiccio Perinia thanked the homins for cleaning up the mess before the Queen could see it, blamed the mistake on his assistant who profusely apologised, and both of them departed.

The Assistant Botanist has agreed to meet those interested in helping her gather materials near the bar in Yrkanis at 5h Holeth, Pluvia 6, 3rd AC 2549(JY) 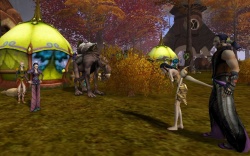 The assistant botanist (left) instructs some volunteer foragers in the Yrkanis market.

After the huge disaster of the presentation, the assistant botanist held responsible for the mistake was tasked by Cuiccio Perinia with gathering the materials needed for a second attempt. This proved far too much for her alone, but luckily she found many homins willing to help her gather all those materials. Several teams of volunteers collected all the materials she needed well on time.

Cuiccio Perinia will present his newest botanical creation in honor of Queen Lea.

Preperations start at 5h on Dua, Germinally 26, 4th AC 2549(JY) at the Royal Conservatory in Yrkanis. 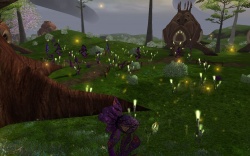 Once again the crowd gathered at the Royal Conservatory in Yrkanis to watch the presentation of Cuiccio Perinia's creation. (This time most likely fully prepared for battle and awaiting to see how he'd screw up now.) Cuiccio Perinia and his assistant botanist again took the same stroll through Yrkanis, sprinkling seeds and growth potion throughout the streets.

And again the assembled crowd returned to the conservatory to await the results, which again didn't take long, but this time were exactly as intended. Within moment hundreds of beautiful, decorative plants had spawned all over the city. The crowd waited in anticipation a few moments longer, but these plants did not suddenly go on a murderous rampage.

Queen Lea was fetched from the palace by the only Noble present, and presented with the sight of the city as a gift in her honour. She thanked Cuiccio Perinia and took a few moments to enjoy the beauty of it all before returning to the palace. Unfortunately for Yrkanis tourism, the plants only lasted for a few days.

Retrieved from "https://en.wiki.ryzom.com/w/index.php?title=Event:Cuiccio_Perinia_Presents&oldid=25454"
Category:
This page was last edited on 27 February 2015, at 23:15.