Difference between revisions of "Event:Curious Phenomenon in the Burning Desert" 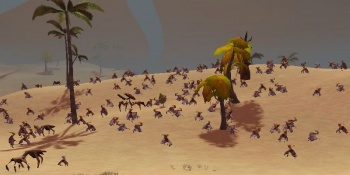 The hills are alive with the swarms of Frahar.

In the very first month of Jena Year 2552, peace was finally restored to the Burning Desert after the uprisings that had started two cycles earlier. By the start of the year 2552, major strides had already been made, and the last step was to drive the Frahar armies out of Frahar Towers.

To do this, the homins had to confront the leader of the Frahar armies, a former Fraider named Pratarr. Much blood had to be shed to bring him out of hiding, but once contact had been established, the Fyros actually managed to come to a peaceful solution with him.

His demands met, Pratarr withdrew his armies back into the underground caves and tunnels from which they'd came, and the Fyros could finally breathe easily again. The impending collapse of the Fyros Empire had been completely averted.

Buildup for this event continued on from Burning Desert Excavations, Sunday, 1 August, 2010.

The previous events had left the Frahar Towers region and part of the Oflovak's Oasis overrun with swarms of highly hostile Frahar. The expedition on Fallenor 11 had successfully eliminated the Frahar's means of replenishing their numbers, but there were still literally thousands of Frahar spread throughout the regions, attacking any homin in sight. They'd have to be completely removed before peace could be restored to the desert.

But there was another twist to the story; the Akenak had learned from the Fraiders that a Frahar named Pratarr had taken advantage of the boom in the Frahar population, and had commandeered the Frahar swarms in order to pursue his personal agenda to wipe out hominkind.

To this end, the Frahar were buildings totems for an unknown but probably sinister purpose. The Akenak called on all homins to thin out the Frahar and destroy the totems.

Homins had started on thinning the Frahar populations right after the expedition ended, and before the month of Fallenor was over they'd already cleared Oflovak's Oasis of all Frahar. Ofcourse Oflovak's Oasis had only contained relatively low numbers of Frahar. Clearing out Frahar Towers would take much longer.

Nevertheless, as winter began, homins valiantly started the task of clearing out Frahar Towers. Various teams managed to destroy dozens of totems and the Frahar armies guarding them. Giving how many there were though, even this was just a drop on a bucket, so progress was slow.

One of the teams clearing out Frahar discovered a totem near Northlake Farm that proved much harder to destroy than any of the normal totems that had been destroyed so far. Pin Ulyn was brought in by an Akenak after she requested to witness the destruction of this totem, but the team failed to destroy it. Instead they spread word of this super-totem hoping another team would take up the challenge.

A few days later a more general call went out from the Akenak:

Answering the call, another team did take up the challenge to destroy the super-totem. After unleashing enormous amounts of magic upon it, they eventually managed to destroy it. Unfortunately Pin Ulyn wasn't there to witness it.

Homins thus waited for the year to pass and the date to come on which Pin Ulyn had called for the expedition...

The totem guarded by Frahar.

Once again an army of volunteers gathered at Northlake Farm guardpost to meet the Akenak and Pin Ulyn there. Pin Ulyn instructed them to destroy another of the super-totems, which one didn't matter, while she would observe the effects on the bark from Midpeaks in the middle of Oflovak's Oasis.

The team decided on the nearest known totem, in one of the canyons just south of the super-totem that had been destroyed previously. This totem was still guarded by an entire army of Frahar, so the homins took up position around the mouth of the canyon and attempted to lure the Frahar out and into their trap. This strategy proved largely succesfull, but the homins had some trouble when they had to advance into the canyon towards the totem. A few times they were overwhelmed by the Frahar and had to retreat into the outpost, but the Frahar never managed to press their victory and wipe the homins out.

Eventually though the homins managed to wipe all the Frahar out and could begin the slow task of destroying the totem. Once that was completed they went to Midpeaks to meet back up with Pin Ulyn, who announced she'd discovered the center of the disturbances. It was located in the southeastern corner of Flaming Forest. Pin Ulyn led the homin army to this location. 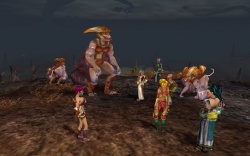 As expected this location turned out to be where Pratarr was hiding. With his hiding place found, Pratarr chose to reveal himself to the homins. Before unleashing his army on them and tearing them to bits, he furiously explained to them why they would die: as revenge for his family that had been killed by homins. The Akenak and the expedition did their best to convince him that those were other homins, and that they'd be happy to help him kill those other homins in return for peace.

From Pratarr's description of the homins that had killed his family, Pin Ulyn was able to deduce that they were Underground Slicers, notorious bandits. Pratarr gave the homins a short time to bring him the heads of the Undergrounds Slicers to prove their goodwill and earn his trust. The Akenak with Pin Ulyn in tow immediately rushed to the hide-out of the bandits, leaving most of their army behind to keep an eye on Pratarr.

The Akenak personally slaughtered the Underground Slicers and brought their heads to Pratarr, who accepted the peace offering and promised to leave with his army. In their rush to get the heads to Pratarr though, they left Pin Ulyn behind, and she didn't take kindly to his, exclaiming she was done with the Akenak and would make the final analyses with her own team.

After Pin Ulyn returned to her tribe, the Akenak returned to Pyr for the debriefing, and the homins of the expedition returned home. In the following days, all the Frahar disappeared from Frahar Towers, presumably crawling back into their underground hideouts.

Retrieved from "https://en.wiki.ryzom.com/w/index.php?title=Event:Curious_Phenomenon_in_the_Burning_Desert&oldid=25463"
Category:
This page was last edited on 27 February 2015, at 23:21.