Difference between revisions of "Event:Fairhaven Faire" 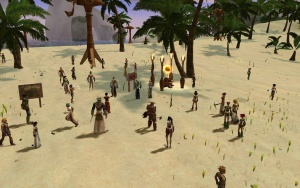 The Fairhaven Faire is now open!

The Fairhaven Faire was held in the summer of the second cycle of Jena Year 2553. It was an open market in Fairhaven organised by the Tryker Taliari to encourage trade in the lakelands and promote Fairhaven as a centre of commerce.

The Faire was well advertised with signs in all capital cities and featured the first ever fireworks vendor in Atys. It concluded with a fireworks show and was planned to become a regular event.

(This event was entirely initiated by the player governments, with the official event team lending a hand.) 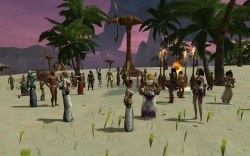 Every Tryker's dream: a busy market.

The Tryker and other inhabitants of Fairhaven had always enjoyed the idea of market days. Throughout the decades, ideas of Fairs popped up in the politics of Fairhaven again and again. Sometimes these never got beyond the idea phase, sometimes an effort to actually organise a Fair was made and failed, and sometimes a Fair was actually held, but was never successful enough to find repeat. Nevertheless, talk of a new Fair would always come up again sometime later.

And so again, when the last attempt was long forgotten, the plans for a market came up again in a Taliari meeting on Fallenor 30 in the third cycle of Jena Year 255 (presumably because the Taliari had run out of other things to discuss). Initial plans were drawn up, but it would take 3 more Taliari assemblies (and 3 more cycles of Atys) before the preparations were finalized and the first Faire could be held. After some trouble with the signmaker, signs were placed near the stables in all capital cities to advertise the market. 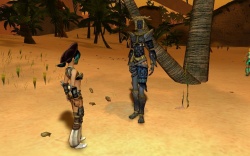 The ONLY Fireworks Vendor on Atys!

Welcome to the Fairhaven Faire!

Homins, come browse through some of the finest crafted weapons, armor and jewelry on Atys!
Crafters of all levels, come sell your wares!
Diggers come and offer your materials to those wishing to hone their crafting skills!

The Fairhaven Faire will also host the ONLY Fireworks Vendor on Atys!

To wrap up the event, Ballistic Mystix will sponsor a Fireworks Exhibition towards the conclusion of the Faire. 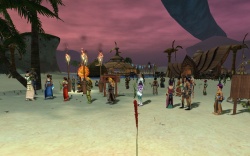 There was a line for fireworks.

The Faire officially opened at noon on Thermis 17, in the second cycle of Jena Year 2553. It then lasted about a day and a half, finally coming to a close in the early hours of Thermis 19. During that time, people came and went, shouted what they were looking to buy or sell, or just generally socialised.

Crafters were encouraged to come sell their wares and many a set of armour and jewelry changed hands. But equipment wasn't the only thing being traded; outpost items were also popular, particularly armilo and egiros, and even some occupation products were sold, mostly as snacks. No doubt many visitors also came for the party more than the wares.

Most popular however, was the fireworks vendor from the Atys Blast Company, who unfortunately was only willing to sell 20 pieces of fireworks per customer, presumably to not flood the market and keep demand high. 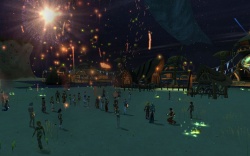 And a Fireworks Exhibition at the end.

The Faire was officially closed with a firework show around midnight of Floris 18.

ABC offering various handcrafted fireworks made by the knowledge handed down from generation to generation of pyromasters from the old lands.

Don't settle for any fireworks, purchase those only made by the Atys Blast Company!

Assembly notes for the Taliari meetings during this event: