Difference between revisions of "Event:Fighting Fire With Fire" 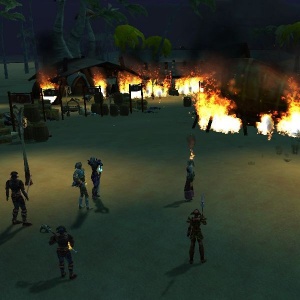 Fighting Fire With Fire was an event in the Tears of the Emperor event chain. In this event, Matis troops conquered and sacked the Fyros town of Thesos.

This event was the result of an earlier event in which players could chose to dig materials for either the Fyros or for the Matis. At the end of that event, the Matis side had received more materials, thus the Matis army won the battle for Thesos.

The Matis called upon volunteers to dig materials for a secret weapon with which to destroy the Fyros.

Summary of the event

The materials that had been dug for the Matis were used to construct the secret weapon. King Yrkanis ordered a small group of volunteers, including the Matis Nobles, to escort the secret weapon to the front line and to then use it to conquer the Savage Dunes region, while Prince Stevano would follow with the Matis army.

The secret weapon turned out to be yubo's which were specially trained to drop bombs in the middle of the Fyros army. Commanded by Trigio the Yubo Whisperer, these yubombs quickly laid waste to the Fyros force in Hidden Source. Roused by the success, the small group crossed the border into Savage Dunes and also eliminated the Fyros forces there.

There was some hesitation amongst the volunteers about using the yubombs on a town, but eventually the majority of them decided to take Thesos as well. The Imperial Army regiment in Thesos was quickly annihilated by the yubombs, but the town guard chose not to resist the invasion. The Nobles, as the highest ranking Matis on scene, decided to demand the surrender of the town.

But at that moment, Prince Stevano arrived with the Matis army. The Prince immediately ordered the town sacked and burned to the ground, despite protests of the volunteers who had taken the town in the first place. He then reportedly rode off into the sunset cackling and gloating as the town burned, the genocidal maniac.

Thesos was burning and occupied by Matis troops for months before the Fyros re-established the town.