Difference between revisions of "Event:Pothole Drama" 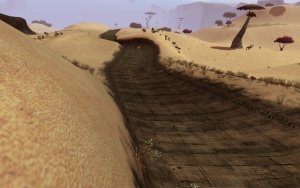 The Fyros roads in better days.

In the spring of the third cycle of Jena Year 2550, there were some problems with the roads in the Burning Desert. These roads had remained intact for decades but were now suddenly starting to show potholes. An investigation was launched by the Fyros Akenak, which found that a single individual had been deliberately tearing up the roads.

Things were set in motion by a local bath hostess who brought the poor state of the roads to the attention of the Akenak and implored them to take action. This bath hostess was also of great help in the actual investigation, as she turned out to have a lot of family members with influential positions amongst the local tribes.

The homin who was found to be digging the potholes was apprehended, and imprisoned in Pyr. The Akenak convinced the Barkers tribe, who had originally built the roads, to repair the potholes.

PYR, Burning Desert - Posters have recently been placed around Pyr by Kaxie Mekops, local bath hostess, regarding the condition of the roads in the Imperial Dunes. When asked about it, Kaxie gave the following statement:

"I can't believe the state of the roads around here! I was traveling back home to see my mom and fell into a hole in the road! My arm will heal but the roads are a hazard to all homins that travel them. Something must be done and quickly!"

Kaxie will attend the next Akenak assembly to see if the Akenak are willing to take measures. Our reporter has a feeling that she plans to take the matter into her own hands if she is not satisfied.

You don't mess with these roads!

Kaxie Mekops attended the Akenak meeting and brought her case before the Akenak, who agreed to help her launch an investigation into why the roads were deteriorating.

Kaxie Mekops, several Akenak, and the many homins who wished to volunteer their services met in Oasis Fountain Square in Pyr. At the Akenak's request, Kaxie led them outside of the city to show them where she had seen the potholes in the road. She needn't have bothered though, as many potholes were clear for all to see just outside the Pyr gate. 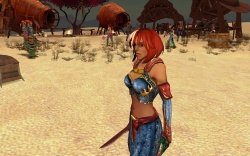 Clearly, the problem was real, but what could be the cause? Many theories were proposed by the homins present, but no evidence could be found to determine anything. Kaxie suggested asking her mother, Aean Mekops, the tribe welcomer of the Leviers tribe, if maybe her tribe had seen anything unusual recently that could be connected to the holes in the road. Since the Leviers camp was already nearby, the expedition decided to follow this suggestion.

The Leviers had no idea what could be causing the potholes, but they did tell the expedition the story of how the roads were originally built by the Barkers tribe, and how that tribe later broke with the Fyros Empire because they did not receive the proper recognition for all the work they'd done. The expedition thus decided their next step would be to go to the Barkers and talk to their outpost officer, Aetis Mekops, who was a distant cousin of Kaxie Mekops. 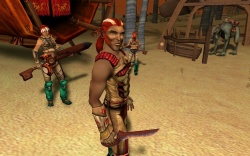 The quickest way to the Barkers camp in Sawdust Mines was straight through Outlaw Canyon. Though it wasn't the safest path, the expedition was experienced enough to have little trouble with the dangers of it. Just after they had climbed up the ramp leading into Sawdust Mines, they came across a male Fyros digging holes in the road. He called himself Ambyx. He was placed under arrest and questioned, but refused to even admit he was digging holes in the road, even though he'd been caught red-handed.

Giving up on getting anything out of him, the expedition decided to proceed to the Barkers camp with Ambyx in tow. At the Barkers camp, the Barkers chief once again regaled the story of how his tribe was unfairly treated by the Empire after they had helped build the city of Pyr. But he agreed to repair the roads as long as the homin responsible for breaking them was punished. Thus the expedition dragged Ambyx back to Pyr, where he was handed over to guard sergeant Zean Pelorus to be thrown in jail.

The Barkers kept their word and repaired the roads quickly. The Akenak promised to make attempts to give the Barkers tribe the recognition they were due for their help in the building of Pyr. It remained unknown whether Ambyx, the homin who had been digging the holes in the roads, had been secretly working for some sinister cause, or was just a madman with nothing better to do.