Difference between revisions of "Icon Worshippers"

2484
Region of Cities of Intuition explored, cleaned of goo and made relatively safe.
Ancient pro-Kami Guild of Cho reformed by Hoi-Cho to spread word of Ma-Duk. Tribe of the Icon Worshippers reformed.

This suggest the Icon Worshippers tribe was around in the Old Lands but didn't survive the Great Swarming, and the Zoraï reformed the tribe shortly after they settled in Cities of Intuition. 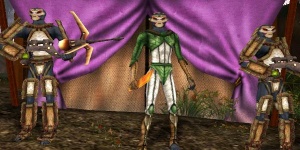