Difference between revisions of "Kuilde"

The Kuild is a tribe of devout Karavan followers from all 4 homin races. Of all the many tribes aligned to the Karavan, the Kuild most directly follows and supports the Karavan. As such, it's members can be found alongside Karavan all over Atys, assisting the Karavan in maintaining and guarding their altars and temples. Their main camp is in Nexus, where the Kuild wages a war against both other tribes who have camps in that region, the Company of the Eternal Tree and the Recoverers, both devout followers of the Kami.

The members of the Kuild are homin agents of every race who work for the Karavan. The tribe has sworn allegiance to the disciples of Jena in exchange for their protection and sources of wealth. The Kuild collects materials which they trade for themselves and for the Karavan.

From "Matis History, the New Beginning":

Thus it appears, as would be expected for such an important tribe, that The Kuild has been around since long before the Great Swarming and was immediately reinstated as soon as homins arrived in the New Lands.

The Kuild Coat of Arms 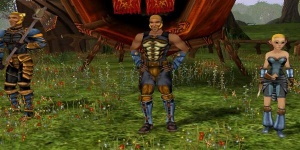