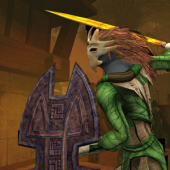 The first Zoraïs were a mysterious group of people who lived in the ancient jungles in the region known as Zoran south of the river Ti-aïn. It is not known exactly when the Zoraïs settled in the area but it was probably somewhere between 2199 and 2205. The first Zoraïs set up camp in the jungle when a tribe of them came into contact with the Kami. Given to mysticism, the Zoraïs built up mysterious temple cities centered around the worship of the Kamis. The goo infested area the Zoraïs had claimed was not prized by other people and their civilization was able to quickly expand becoming a force to be reckoned with. Led by a dynasty of spiritual chieftains, they were able to annex jungle land easily fending off Fyros attacks on their impregnable temple cities… Read more.

In Ryzom, crafting is a fascinatingly complex system, with many little oddities and facets of interest for those willing to be constantly baffled in the name of science. Player-crafted equipment is, without doubt, the best equipment available ingame - equipment sold on the vendors by NPCs, and even Bandit Lord loot equipment, pale in comparison. As such, crafting is central to Ryzom; no warrior or mage can get by without a good player crafted weapon or set of amps; and materials used in crafting are the main currency of the Ryzom economy. Large guild battles are fought in the most perilous corners of Atys, for the privilege of having first pickings of the most valuable crafting materials… Read more.