The portal of Atys tribes

Tribes of the Burning Desert

Tribes of the Forest

Tribes of the Lakes

Tribes of the Jungle

Tribes of the Nexus

Tribes of the Prime Roots

The peoples of Atys

During your wanderings, you will meet primitive and homine tribes. It's better to find out who you're dealing with before it's too late.

Due to the fragile balance of forces on Atys, enemies of today can become allies of tomorrow, and vice versa. There is no "black and white", the stereotype of the separation of powers, where the good and the bad never change sides and the geopolitical situation is more complex than it seems.

The development of the political, social and environmental situation on the Planet depends entirely on the interaction of the Inhabitants of this world.

However, homins can be classified:

According to their beliefs, in factions
by allegiance:

According to their nationality or residence, which often determines their behavior towards others, but does not make it an absolute rule
The Nations: (Fyros, Matis, Trykers and Zorai)
The tribes proper
The Bandits not to be confused with the tribes.
Isolated individuals, such as hermits.

Apart from the bandits, the homins are gaining fame from each of these groups, apart from those of the bandits who are systematically hostile towards all outsiders to their group. The different groups will react to the presence of homins nearby according to this tribe fame (cf: app "fametracker") which varies according to the missions and actions performed.

The Company of the Eternal Tree is a tribe of devout Kami followers from all 4 homin races. Of all the many tribes aligned to the Kami, the Company of the Eternal Tree most directly follows and supports the Kami. As such, it's members can be found alongside Kami all over Atys, assisting the Kami in maintaining and guarding their altars and sanctuaries. Their main camps however are in Haven of Purity and in Nexus, and welcome visitors of all races as long as they do not oppose the Kami.

Thus it appears, as would be expected for such an important tribe, that the Company of the Eternal Tree has been around since long before the Great Swarming and was immediately reinstated as soon as homins arrived in the New Lands. Some say that it was founded in 2364 by Mai Loo-Kai, in order to preserve the purity of the Kami faith.

Wandering the region (Haven of Purity) 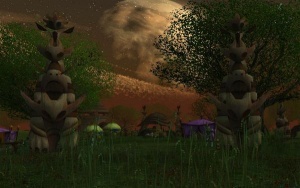 The Company of the Eternal Tree´s camp in Nexus

Portal of the Kamis