Of the family of Psychic plants, the psykopla's short stem is surmounted by a large bulbous head which changes color when pulsating. It has been said that the psykopla is able to direct psychic waves onto a prey to gain control of its psyche. The victim then becomes devoted to the plant and acts on its behalf in the protection of its habitat. This is, however, yet to be proved. The psykopla occurs mainly in forest and jungle regions it being slightly bigger in the latter environment.[1]

In recent years Psykopla Tea has become more popular as its use among the populous of Atys increases. It is not yet known whether this tea any noteworthy effects on the consumer.

Psykoplas can be quartered for: 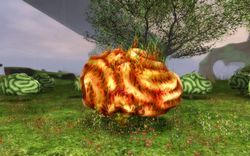 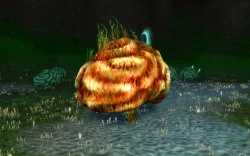 In recent years, Psykopla infected by the Goo have been seen in the Witherings.