Difference between revisions of "Renegades"

The Renegades are a rebel tribe of Fyros who broke away from the Fyros empire to follow the Karavan. They control most of the Dunes of Exile, having manned guard towers all throughout the region and making their camp not far southeast of the town of Dyron. The Renegades wage a war against their former empire, and thus they'll attack any Fyros approaching their camp, but homins of other races are allowed to enter.

It is interesting to note that the Renegades are one the few tribes to station guards at other locations than their main camp. At many places scattered all over the Dunes of Exile region one can find their guards posting in pairs of two or even four, usually at guard towers, and these guards will assist players against any nearby aggressive creatures just as camp guards would.

From "Fyros History, the New Beginning":

2496
Mercenary tribes and bandits fuel feeling of antagonism for personal gain. General feeling of insecurity.
2497
Pro-Karavan tribe of the Renegades founded.
Ancient pro-Kami tribe of the Dune Riders reformed and based in Savage Dunes.

This means the Renegades were founded after the new Fyros empire had been well established and the Burning Desert made relatively secure, during a time of rising tensions when many Fyros broke away from the empire. 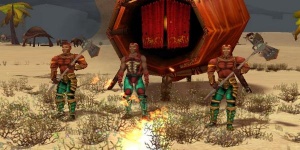