A short technical guide for experienced contributors and documentation managers.

Working as a team

Never forget that any document (except protected pages, accessible only to administrators) can be edited at any time by anyone. See below (Edition puis Content Validation) for good practices to be followed.

It is often useful, convenient or necessary to leave a message to someone else. For that purpose a “Talk” page is associated with each document when it is created, for example here: Talk:Wiki Technical Guide [[Talk:{{FULLPAGENAME}}]].

In any case, you must try to maintain something readable, so each topic will start with a title ===Title of the topic==. It is better to have fifty small separate subjects, each with a title, than a single package of fifty subjects. This facilitates discriminated responses in their consideration, implementation, etc.

At the end of the subject, always sign with ~~~~. This immediately lets anyone know who posted the message and when.

Usually, responses are made by indenting as in emails. This is done by opening the line with one more : than the previous part. Obviously each answer, each rebound will be signed. This is very useful for someone who will ask the same questions later on and who will thus see this discussion as part of a “Knowledge Base”.

Last, it may be useful to attach to the title a ✓ to indicate that the subject is closed ==Title of the topic {{OK}}==. If the subject has to be reopened, the ✓ can be replaced by a ✗ {{KO}}.

Unfortunately, those concerned by the question are not necessarily informed (the number of articles monitored - and therefore likely to have their changes notified - is capped so as not to blow up the database). Thus, also think about preventing the person or persons who may be concerned by the discussion by indicating the link to the discussion. Again, title and signature, even if very short, are welcome.

At first glance we will notice that if the Wiki is easy at writing, it is heavy to manage with all its rules of conviviality and efficiency, its traditions built on the experience of its predecessors, etc. This because the wiki also has its “Lore” (oral tradition).

Do you really want to get involved in the wiki? So don't hesitate to be sponsored, without embarrassment, shyness or shame... We have all made our debut, and perhaps, hopefully, it will be up to you to sponsor later on. You don't know anyone? Try to contact “alumni” on https://chat.ryzom.com/channel/pj-ryzom_wiki or contact them from Special:ActiveUsers.

There are four rules that coexist:

• the rest and especially the roleplay parts 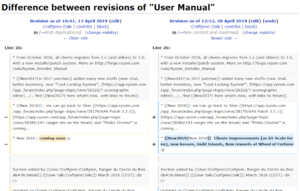 With the exception of archived documents and documents with the official status of “final document” (Lore, Chronicle), everything can be improved and this is one of the riches of wikis.

Nevertheless, certain rules of constructive conviviality must be respected.

First of all, it is necessary to assess whether or not the changes are significant. There are no rules and it's more of a feeling, but if the change is drastic, it's wise to start by looking at the page's history (button next to “Edit”). If the content (not the form, look, spelling…) has not changed for some time, we can assume that its author left it for this and that the document may have aged, that it may need updating. An example is shown opposite.

An update can be considered drastic when it deletes paragraphs or even lines that are fundamental to the development of the topic. In this case it becomes appropriate to leave a message in the “User Discussion:xyz” page. While waiting for his answer (one week?), it is wise to keep in the modified page the original text passed as a comment. The easiest way to pass a text as a comment is to preface it with <!-- and to follow it with -->. But there are sometimes issues, especially if there are already other comments. In this case, the hammer and chisel can be used by framing the text with <noinclude><includeonly> and </includeonly></noinclude>. Why such a complication? Because it is always necessary to respect the writings of an author and his intellectual authorship, even in free software world. Otherwise, we run the risk of an:

“An edit war occurs when editors who disagree about the content of a page repeatedly override each other's contributions. Editors engaged in a dispute should reach consensus or pursue dispute resolution rather than edit warring. Edit warring is unconstructive and creates animosity between editors, making consensus harder to reach. Users who engage in edit wars risk being blocked or even banned. An editor who repeatedly restores their preferred version is edit warring, regardless of whether those edits are justifiable: “But my edits were right, so it wasn't edit warring” is no defense.”

This should not be confused with the edit conflict . Excerpt translated from Wikipedia Aide:Conflit de versions:

“In Wikipedia, a version conflict or edit conflict occurs when two contributors work on the same page at the same time: the second one who records, having worked with an obsolete version of the page, has his modification rejected. Since version 1.3 of MediaWiki, this only happens if the changes cannot be merged automatically.“