To create an ultimate Ryzom resource, which can be used and edited by anyone. 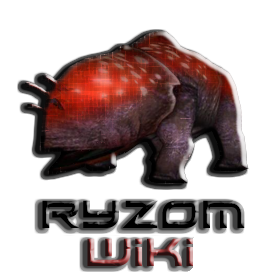 The founder of the initial wiki was an old Ryzom player named Raynes. The wiki fell into dereliction and was revived by ex-CSR Secor some time during 2009. Players Nysha, Deadelf and many others helped Secor edit the wiki during this time before he broke away from Ryzom all together about mid 2009. After Secor broke away it was decided by the remaining sysops and bureaucrats, Nysha, Deadelf and Marelli, to put together resources and have the wiki privately hosted, due to the ad-spammed nature of the wikia which had been its home.

In January 2010, after some discussion, the German Ryzom Wiki, origninally run by Lasabo, became part of Ryzomnomnom. Thanks to Cotare the "merger" went as smoothly as possible. The two wikis share user databases, but are otherwise independent, with the English wiki operating under EN.ryzomnomnom.com and the German wiki under DE.ryzomnomnom.com.

On 28 May 2010, again after some discussion, the French Ryzom Wiki (EncyclopAtys), originally run by Karouko, became part of Ryzomnomnom. Due to EncyclopAtys not having the latest version of MediaWiki software installed it took some work to update and merge the user databases. The merger was deftly handled by Cotare, not without some frustration though. Encyclopatys can now be found under FR.ryzomnomnom.com and makes use of the central media repository.

Whilst the staff and contributors of the Unofficial Ryzom Wiki (URW) make every effort to ensure accuracy of the information provided within we cannot guarantee correctness nor completeness. This is a user edited Ryzom wiki and contributions from users may be false, misleading, offensive, etc. Readers use the RW and the information contained herein entirely at their own risk and neither Winch Gate, RW, RW's administrators nor any of the contributors can be held liable for any damages incurred as a result of the use of the RW.

Anyone intending to make use of the information within is advised to check it's source first.

These groups might not be contributors but it is a thanks to them and some of their resources that we are what we are today and for this we would just like to thank them especially!