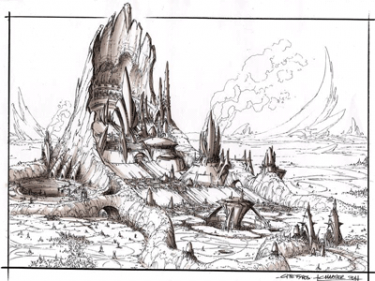 Concept art of a Fyros city

The ancient capital city of the Fyros, it was located in the old deserts before being overrun and laid to waste during the Great Swarming.

Originally Fyre was the name of the oasis around which the city was later build. It was the first city build by the Fyros, and the place from which Dyros the Great united the nomadic Fyros tribes into the Fyros Empire, thereby becoming the first Fyros Emperor.

Colomo was such an animated place what with trade fairs and convoys, traveling merchants and crafters with their tales of close shaves with wild beasts and such like.