It has been suggested that this article should be rewritten or updated. 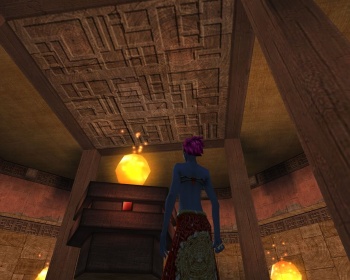 Example of Zorai pictographic writing on the ceiling panel of zorai apartment.

The pictographic writing of the zorai can not be viewed as simply a means of recording events or various bits of data. Unlike other nations, the Zorai treat their written word with an awe and admiration. The pictographic writing of the zorai is quite impersonal: it does not include any pronouns, neither does it have any refernces to time of day or the season of the year. Usually the sacred truths - the mantras are comitted to writing and often repeated over and over again on buidings and weaponry, however in some cases the inscriptions on the usable objects (weapons) are in fact instructions on how to use these objects to best effect.

Because of that the zorai pictograms have often been considered pure ornamentaion by other races, which of course they are not. Neither do they represent an alphabet, where 1 symbol would stand for 1 letter. The pictograms are carefully crafted sets of meanings put together to represent a bigger and more complex whole. Most of the elements used in the pictograms have a meaning of their own and combined in a specific way they produce a meaning of greater magnitude, reaching an effect of synergy.

The study of Zorai pictograms helps scholars better understand the philosophy and mentality of this mysterious people. The most extensive study in this field has been carried out by a matisian scholar Komi the Nameless.

Interestingly enough, unlike zorai speech the pictograms have no references to time - future past or present, today or tomorrow. One way to look at it would be that the written word transcends time and therefore no tracking oа days or years is required.

Explained translations of most common pictograms

The above example of the pictograms enscribed on the sword is a typical zorai mantra. Repeated over and over again it can be comprehended as "Even for a skilled warrior objects of beauty (and the way they affect everything) are most important. A skilled warrior should work very slowly but steadily and then he will surely reach all the goals." Basicly this line states: even though you are a skilled warrior remember that first and foremost you are a zorai, don't act on impulse, appreciate beauty!

The writing on the amplifier is a description of the object itself, which unlike the sword shos that the amplifiers are just a magnifying glass for the bearers innate abilities they have no attributes of their own and therefore deserve no mantra insription. Another way to understand this would be - It's the one who acts who is responsible for his actions, and not the means through which the action is executed.

The Guild hall mantras mirror those on the zorai sword which means that these particular mantras have a most important educational aspect. It is interesting to note that although nature-loving and meditative the zorai still consider themselves a warrior culture. hence the pictogram that refers to "honor" - "Fight with suh quality that you know little defeat (Only the high quality of fighting brings victory). This latter is an interesting aspect since basically it can be understood as: "Strength is in quality of individual fighters and not in numbers".

The writing on the zorai rifle is another plain instruction. It explains that concentration is important when firing, and that the shooter should select his ammunition with care using it's diverse parameters. Same as with amplifiers this stresses the importace of shooters concentration and carefully selected ammunition rather than the rifle itself.

The flags are a different matter. Since they are placed all over the citis and the writing on them is repeated, while describing the location itself: city (a place of most divrsity with many homins) they also carry a mantra: Despite the diversity in the place where many homins gather, spirit (or rather spirituality) should always prevail. In other words don't let your mind be distracted by the mundane in the busy crowds of the city, remember that you are a zorai!.

The flag on the central square - a place of most important declamations and social gatherings has a similar inscription: This is the central place of the city, a place of power because it is here that true speech is most effective. As suggested by Komi the Nameless in his research on zorai pictograms this is an example of a difference between the "words" used in everyday life, and the "true speech" - words of wisdom, bearing power, vocalised mantras that influence the fate of the zorai nation.

Examples of other pictograms

These are some of the zorai pictograms used by the players. The lefthand image shows various pictograms found by Komi the nameless within the ancient zorai scrolls (game sketches). The image in the middle has first appered in the Kitin Scriptures by the same author. The image on the right is the pictographic name of a zorai guild from Leanon.

For more info on zorai pictograms, a guild inscription of your own or other related matters please contact Komi the Nameless