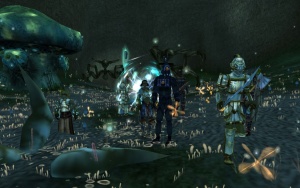 The Karavan Researcher needs his back covered.

HELP WANTED:
The Karavan Research Division needs homin assistants to aid in collecting data at the Kitins' Lair in Almati Wood. There is a need for guards, larvesters, harvesters, careplanners, and data collectors. Apply at the Karavan Researcher's camp outside the Ranger Camp in Almati Wood on Dua, Harvestor 2, 2nd AC 2556(JY) at 17h with qualifications and proper gear.

Homins met the Karavan researcher in Almati Wood and escorted him on a tour throughout the Kitins' Lair. Samples were taken of larvae and carcasses, eggs and larvae were counted, Kitins were observed and often-times killed.

The Kitins seemed to be aware of the incursion. They sent out more patrols than usual, blocked corridors and set up ambushes, but never attacked in full force.

All homins that stayed until the end received a Karavan pick.