First sighted by the Fyros during an expedition into the Prime Roots, the insectoid beings known as Kitins have become the most feared, deadly, and reviled enemies of hominkind. 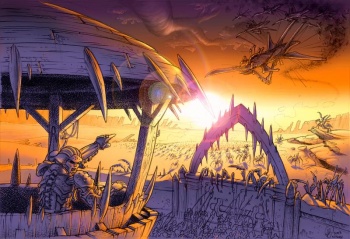 This interminable struggle between species began when the militant Fyros, taken aback by the first encounter, slaughtered the creatures without thought. The revenge of the Kitins was swift and devastating: the Great Swarming of 2481 eradicated the unsuspecting homin civilizations within days. Were it not for the efforts of the Kami and Karavan, hominkind may have never survived these horrific times.

In 2490, Kitins were spotted arriving in the New Lands, no doubt in pursuit. They have established nests in remote areas such as the Tunnel of Woe in the Verdant Heights and Desertstock in the Witherings, though their greatest numbers still reside in the Prime Roots. Since discovering the new location of homin refugees, the Kitins have launched several invasions against their fledgling states. Entire regions swiftly fell beneath their massive formations while cities faced grueling sieges. Each time, however, hominkind united and wielded its collective strength to successfully turn back the waves of invaders. Even with these astounding accomplishments, the Kitin threat still looms over the homins of the New Lands.

The Kitin are well organized and their ranks can be divided into three different castes: Worker, Soldier and Elite.