This kitin hunter is recognizable by its huge mandibles and small abdomen and dorsal excrescence. The kincher precedes other kitins into unknown territory to pinpoint precious resources. Munches and analyzes everything in its path, selecting and marking the best materials. This kitin fighter occurs all over Atys.[1]

Anomaly.
The electric attack unleashed by kinchers can be countered with Melee Protection Aura.

Kinchers, when killed, can be quartered for: 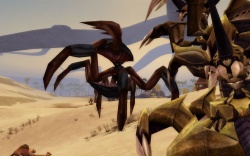 Cherkin leading a pack of Kipucka into combat.

Cherkin
This named kincher can be found in Dunes of Exile, where it preys on the unwary. Its build and appearance does not differ much from the other specimen of kincher to be found in the Desert. It is most feared by the many diggers in the immediate area of Dyron.

Gerder
This Kincher is involved in the Kincher Rite of the encyclopedia. 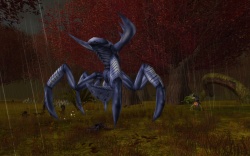 Rippa
There are three kinchers sharing the same name wandering the depths of Atys ( Abyss of Ichor, Forbidden Depths and Land of Continuity, Wastelands)

In recent years, Kincher infected by the Goo have been seen in the Witherings.

Unlike most other animals and kitin, kinchers can spot enemies from 30 meters away, making them harder to sneak past than other aggressive creatures.

Complements to this page: