So this is Goo under a microscope, I guess? Do homins even have microscopes?

Goo :
The Goo is a mysterious form of pollution that seems to be consuming the planet Atys. The Kami are actively trying to resolve this problem. For now, the Goo continues to expand. It first appeared in the Prime Roots, but it has been observed on the back of the planet and some pretend that it is already reaching the Canopies. It uses the network of sap veins within the planet to travel, and bursts out on the new territories it reaches. Creatures and homins can seriously be contaminated by the Goo. A creature infected seems to become a lot stronger, it also loses its self-control and seems to be under the control of the Goo. 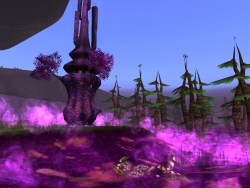 A panorama of the fields of Goo in the jungle.

By far the most Goo eruptions take place in the Witherings continent. The Zoraï even specifically settled in this continent to combat the Goo. In the far reaches of this continent one can find many square miles of jungle completely overrun by the Goo. Staying too close to these contaminated areas for too long means certain death from the contaminated air. However, there are generally no Goo-infected creatures in the Witherings.

Silan also has a substantial area covered by Goo, aptly named the Blight Zone. Here one can find various creatures infected by the Goo, including Frippo, Capryni and Ocyx. The homin refugees being trained on Silan are being sent against this Goo contamination on a daily basis. Milles Dodoine gives them missions to destroy the Goo eruptions (see The Merry Harvester #2), while the Kami give missions to destroy the Goo-infected creatures (see Purge the Lands) and the Karavan give missions to study the Goo (see The Study of the Goo). 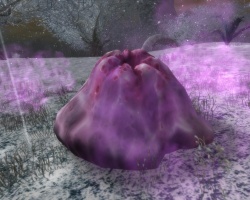 A Goo eruption in the Forest in winter.

In recent years, there's been a new outbreak of the Goo in Darkmoor, a subregion of Liberty Lake in Aeden Aqueous. Though homins can so far still pass through without taking damage from contaminated air, the local population of Stinga plants have all become infected by the Goo and are now highly aggressive to homins.

The only known Goo eruption in the forest regions is a minor one in the camp of the Darkening Sap tribe in Heretics Hovel. It's generally harmless to homins. On one event however, the Darkening Sap have shown they can use it as a basis from which to contaminate half the Verdant Heights continent in a matter of months (see Event:It's Hard to say Gibbaï).

No eruptions of the Goo have so far been observed in the desert or Prime Roots regions.

The Kami are powerless against it. What's more, they are extremely vulnerable to it. I've seen with my own eyes a Kami being sucked up by the Goo before I could intervene. No, I tell you, it's up to us to protect them. Did you know that homins have a better resistance to the Goo than most other living creatures? Our latest findings seem to bear this out.

— Yi Be-Pian, Old Zoraï of the Company of the Eternal Tree[1] 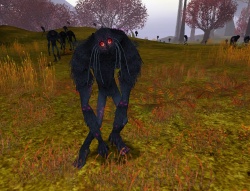 A Gibbaï contaminated by Goo.

Creatures infected by the Goo seem to become stronger and a lot more aggressive. Another notable side-effect is that they become immune to Rot magic.

The only Goo-contaminated creatures that can normally be found are the Morbid Stinga in Darkmoor, Liberty Lake.

Another example of Goo-contaminated creatures are contaminated Gibbaï, who last showed up in great numbers during the Goo infestation of the Verdant Heights.

Study of the Goo 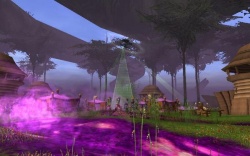 The Master of the Goo tribe camp.

Though many study the Goo to find out how to better destroy it, it is known that some groups also study it in order to find applications of the Goo. For example, how to use it as a weapon.

Most notorious in this regard is the tribe of the Black Circle, however there are others. The tribes of the Master of the Goo, Goo Heads, Darkening Sap and Chlorogoos have all been implicated in researching Goo-technology. All of these tribes are backed by the Karavan, and thus the Karavan themselves are often suspected of researching Goo-weapons.

The Marauders have also been known to use Goo-technology in their weapons and armour.

All the major homin races outlaw the use of Goo for any applications, and allow study of the Goo only to discover how to better destroy it.

Combating the Goo seems to be a tricky business. Though there are certain potions known to hominkind that can destroy Goo eruptions in certain cases, as evidenced in The Merry Harvester #2 or in Event:It's Hard to say Gibbaï, it doesn't seem to always work. Research continues into why this is the case.

It is known that homins can recover from minor contaminations with Goo. A creature that is completely infected by the Goo however, be it a homin or an animal, cannot be saved