Aquaplant, the stinga is provided with a spongy stem which spreads out into long tubular growths.

Two varieties have been identified: the first grows on the edge of lakes, the second on the lake beds. The first variety is physically distinguished by its bright colours.

The Stinga, like all intelligent plants, will attack homins if it is threatened, in which case it uses a magical missile of cold.

It is found exclusively in the Lakes.[1]

The Stinga is used as a flavouring ingredient in the local composition of beer and rum[2]. This is why some mistakenly believe that Lakes beer is stinga rum.

Stingas can be quartered for: 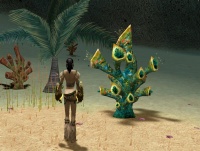 An homina looking at Stinkan.

Anomaly.
Morbid stingas are aggressive and immune to Rot unlike other stingas, this is most likely due to the effects of Goo on them.