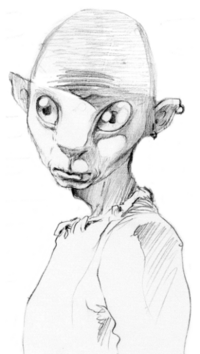 A now extinct primitive race that dwelled in the forest.

It was under Zachini rule that the momos, primitive tribes, were hunted to extermination under the pretext that the inferior creatures menaced the living space of the Matis peoples.
Some old Matis say that the Momos were then recognised by everyone in the Kingdom as distant ancestors and that this very thought disgusted the king of that time. They lived in the lush forests of Atys.