The Races of Atys portal

There are seven hominoid races on Atys. Breeds are important, because they give specific attributes that influence the behavior of the homin. Four of them have created civilizations in accordance with their worldview and feeling. The other three, called primitive, have strictly speaking only one tribe more evolved than the others. In addition, there was a fourth primitive race, the Momos, but it disappeared completely.
Last version 2022-01-05•ᐒ

Gibbaï are the primitive race corresponding to the Zoraï. They exist in the Jungle and the Forest.

Gibbaï, when killed, can be looted for their jewelry, which resembles that of the Zoraï.

The gibbaï in Void are far more intelligent than most gibbaï. These higher gibbaï can communicate with homins and have organised themselves as a tribe, known as the Gibads.

Gibads distinguish themselves from normal gibbaï by several physical traits. First and foremost is the fur colouration; Gibads have a rusty red fur whereas gibbaï have black fur. Other less notable physical features are the more prominent whiskers and larger eyes of the Gibads over those of the lesser gibbaï. Gibbads also wear some beige clothes resembling the light and medium armour crafted by the Zoraï. 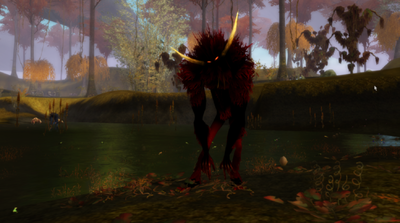 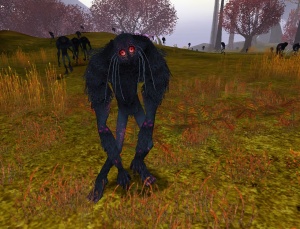 Like all creatures, Gibbaï can become infected with and corrupted by the Goo, making them stronger and more aggressive. Gibbaï seem to be particularly vulnerable to Goo infection.

Infected Gibbaï so far only appear at events. The Goo-infection makes them invulnerable to Rot magic. 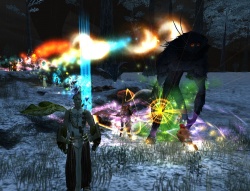 A misunderstood gibbaï is a gibbaï that has mutated to enormous proportions and strength. Specimens appeared in the forest during a Goo infestation. They seem to hang out around Goo mounds, but do not seem infected by the Goo. Much is still unknown about them.