Cutes are the primitive race corresponding to the Tryker. They exist in the Lakelands and in the Prime Roots.

Cutes, when killed, can be looted for their jewelry, which resembles that of the Tryker. 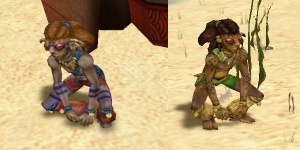 A Cuzan and a normal Cute.

The cutes in Lagoons of Loria are far more intelligent than most cutes. These higher cutes can communicate with homins and have organised themselves as a tribe, known as the Cuzans.

Cuzans distinguish themselves from lesser cutes in several ways. Their skin is lighter and more blueish-grey, and their hair is also lighter and more red than that of normal cutes. Cuzans weir the same kind of clothing as other cutes, but of apparently higher quality and in the colors red and blue. Lastly, the Cuzans distinguish themselves with blue stripes painted on their arms, legs, bodies, and faces. 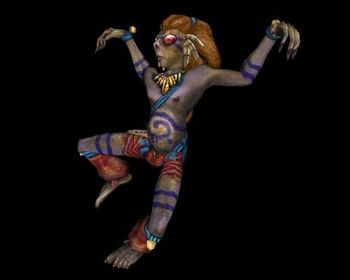