Heernis made the teams. Only basic mats, each team leader gave to him the mats. 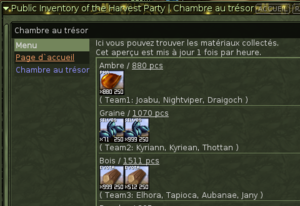 an app to see the teams's work, with /appzone 2485
More on OOC » The mysterious vision at the Kami Blast

In the future there will also be the possibility to register for the event. In addition, you will be able to individually enter the desired material, in which country you are the master harvester, and whether you want to lead a team.

The material you are entitled to will then be calculated automatically.

Many thanks to Lasabo for creating this app!

On this wiki, more on

Portal of the game • Community