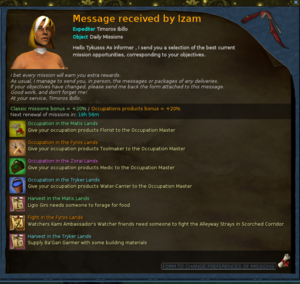 Every day, you have the opportunity to carry out seven missions in the order of your choice, randomly selected from all the "Task" missions and/or "Occupation product donation" missions.A filtering option allows you to restrict the select-able missions according to the fames that you do not want to lower or raise.You also have the option of completing only certain types of missions, but de-selecting missions may have an impact on your final gain.You can abandon a mission at any time if you do not want to do it or do it later. However, this one is not replaced by another and will remain in the list of missions proposed for today. At the moment, Prime Roots missions are not available (who said "fiuuu!"?)

[Note] Selecting only one type of mission will reduce the reward.

[Note] Occupation missions do not require that you have the occupation active but only occupation products to give, including those obtained by exchange or purchase.

For each completed mission, you will be able to choose from three possible rewards:

You can choose if you wish a different reward for each completed mission. The more daily missions you complete, the higher the reward rate will be.

For some time now, you can earn Involvementpoints during dynamic events (DE). Other rewards will soon be added to those you already earn from official merchants (Imperial of Pyr, Royal of Yrkanis, Federal of Fairhaven, Dynastic of Zora and Marauder of the Camp).

The numbers of Involvement points distributed so far are very high ones, to the extent that we noticed players have now some difficulty to read them. That is the reason why the introduction of these new rewards will be coupled with a semblance of “currency reform”. Namely:

Nature of the new rewards

To start (other rewards will be added later), the Involvement points will allow their owners to get, in addition to the rewards already available:

These changes are for us an opportunity to clarify (or recall) the meaning of the Involvement points, or, more accurately, their inclusion in roleplaying and their interpretation by the Lore.In the same way that the dappers paid to New Horizons allow everyone to travel from one city to another in a few seconds thanks to a “time ellipsis”, the Involvement points allow actions that are usually time-consuming to perform in a few seconds.Therefore, they can be seen as units of suspended time allowing their owner to perform in a flash various and varied tasks, such as:

It is therefore this interpretation that allows us to imagine, as “rewards” provided by the Involvement points, a wide range of new activities and capabilities...And leads us to rename the said "point": it becomes the Elyps!

Changes to upgrade the "camp tour" missions (Dappers, Nation Points): decrease in the weight of a package, in order to be able to carry out the mission without a Mektoub.

The 21th June Update on official forum Revaluation of the game's missions to expand your fun.

The 28th May Patch 745 is available. Fix the matis<->fyros fame switch and Nexus map. 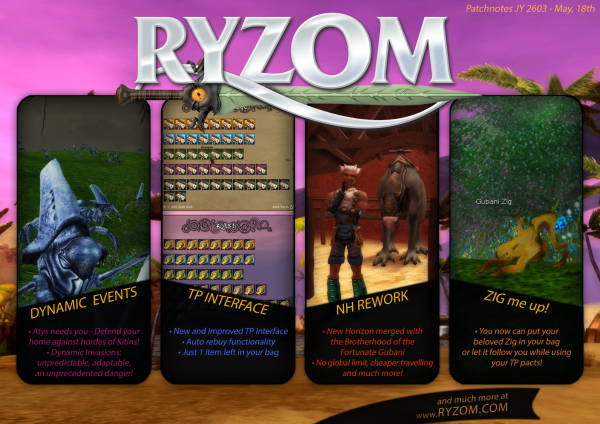 In short (see full message on the official forum), a client, data and server patching and a restart of the game server :

This patch also includes the results of the work done on Dynamic Events (DE), New Horizons (NH) and the target command.

The month of March and the beginning of April were the occasion for a spring cleaning, including:

The next step in the hardware reconfiguration of the platform will see the migration of Atys, the game server, to new higher performing machine and the confirmation of Gingo as the Atys mirror server facilitating the application of patches and providing a rescue solution in the event of a failure of the latter. The Ryzom Team remains at your disposal for any additional information, and best wishes to you! 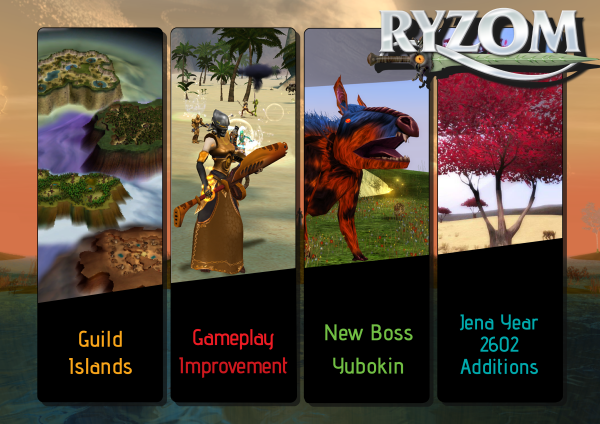 As an example of lovely Improvements : UI-Scale for all Clients, let's have a look in System / Configuration / Graphics / General :

And new Inventory features, with a better quality filter (here, only mats, from q 50 to q 200)

To Discovery of guild islands, by CraftJenn.