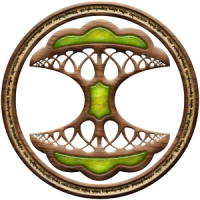 The Matis willingly see the Karavan as faithful servants of Jena who collect resources as offerings for the goddess to prepare for the future on a planet of fresh woodlands and pastures new. But more rationally, they see them as a useful ally whose arms of power they would all too gladly like to learn to wield. Over time, their natural penchant for the powerful and the lordly led the Matis to build up a strong relationship with the Karavan who in turn readily engaged them in their fight against the Kamis. After the Great Swarming however, despite King Yasson's pledging allegiance to the Karavan anew, dissident Matis began spreading doubt within the populous as to Karavan invincibility and their true place in the design of Jena which, in turn challenged the supreme authority of the King! The brunt of the dissention was then put down in 2504 by Jinovitch, a despotic king who instigated the persecution of doubters for heresy.

Nowadays the Matis haughtily see themselves virtually as the Karavan's equal. They forever seek to gain Karavan favor because the Karavan represent an opposing force to the Kamis who incessantly impede Matis manipulation of plant life.

The Matis are suspicious and afraid of being possessed by the weird creatures who oppose the Karavan Guardians. What is more, the Kamis condemn Matis genetic manipulation of plant life. Hence, they were only too glad when the Karavan labeled the Kamis as evil creatures, punishing those who would interact with them. Further to this the Matis monarch passed a law forbidding his subjects to perform “evil-doings” with the Kamis limiting contact with them to their capture and delivery to the Karavan.

More recently, under the rule of Jinovitch, in 2508, the Kamis were overtly persecuted in Matis lands. However, since the accession to the throne of the more liberal king, Yrkanis, the Kamis are now tolerated.

The Matis worship Jena and give her offerings through her disciples on Atys, the Karavan. As well as legitimizing their monarchy, the majority of Matis customs are centered around the worship of Jena which constitutes a veritable religion.

After the demise of the civilizations in the Great Swarming of 2481, many Matis were angry at the goddess for not sending in a Karavan task force in time to save the hundreds of thousands who perished. But under the Karavan’s omnipresent guiding hand, today the majority of the Matis people have come to accept that the swarming could have been sent by Jena herself in a display of her wrath at homin transgression of the divine Law, i.e. homin excavation of the Prime Roots, and homins such as the Zoraïs being tempted to adore the Kamis.

Some witnessed the "apparition" of Elias who appeared in a shaft of light from the canopy during the Great Swarming. Elders claim he is in fact a messenger of mercy sent by Jena to allow them to take refuge in the Prime Roots from kitin onslaughts of the Great Swarming. It is understood that other messengers will come to elevate Matis souls. There were rumors of the coming of a major force before the Great Swarming though the scriptures have been lost.

During the years that followed, some Matis sages founded the Guild of Elias with other homin races to keep his memory alive. This guild was portrayed by the Karavan as a sect opposing the church of Jena and prohibited. In 2505, during the reign of Jinovitch many members of the guild were condemned for heresy against Jena and burnt at the stake. Since those times the guild has gone underground.

Today the Guild of Elias still resides underground on Matis territory though manages to spread the word of the coming of Elias. The Yrkanis government, following Karavan Law, has banished the guild though in reality they turn a blind eye to be able to glean information to keep in control of the phenomenon.

The Matis had little consideration for the Trykers in the past and even led a campaign to conquer their territory and enslave the population. They held disdain for Tryker indiscipline though have since come to be wary of their wiliness in battle. All Matis efforts to instil a sense of discipline into Trykers have led to heavy consequences. Indeed, to escape Matis domination, the Trykers have time again sided with the Fyros. The Tryker-Fyros alliance is what triggered hostilities between the three peoples and brought about the revocation of the Edict of Four Peoples in 2498.

The Matis, realizing that the Trykers cannot be "tamed", now prefer to keep on friendly terms with the flighty little homins rather than risk having them turn to the Fyros again. After all the Trykers are excellent explorers who are nonetheless allied to the Karavan. Since the Peace Treaty of Fairhaven in 2515, the Matis have relinquished land conquered to the Trykers and their mutual faith in Jena has brought the two peoples even closer together.

The Fyros are the inherent enemy of the Matis. In the old lands Dyros the Great, the Fyros Emperor, secured a water route from the lake lands to the desert through Matis territory. This "intrusion" on Matis territory triggered the start of the war of civilizations. The intermittent skirmishes went on for over two hundred years coming to a head with the Fire of Coriolis. A peace treaty signed at Karavia brought with it a period of relative peace despite discord over Fyros placing national interests above Karavan Law.

The skirmishes that were rife during the reign of Jinovitch have given place to relative peace with the Fairhaven Peace Treaty signed in 2515 by the present Matis King, Yrkanis. Nevertheless, the Fyros moving ever closer to the Kamis has given rise to much agitation within the Matis court many of whom call for a firmer stand against Pyr and their policy of Kami proliferation.

For many years the Matis had little to do with the Zoraïs who have always kept their distance from the on-going conflicts between the other homin civilizations in the lands of old. However, a period of peace brought Zoraï travelers from behind their boundaries to Karavia where learning was exchanged and beliefs compared. The Matis were thus able to measure the extent of the force of the Kami and learn about the possibility of another "religion".

The Matis consider the Zoraïs as high-minded homins but whose "pagan religion" must be kept in check. Nevertheless, it was a Zoraï warrior, the father of Mabreka, who saved the life of the present Matis King Yrkanis in 2493. What is more, Mabreka gave Yrkanis asylum in Zora while Jinovitch was in rule and enabled Yrkanis to retake the throne so banishing the totalitarian monarch. Many Matis resent this "debt" to the Zoraïs which they claim has tarnished their honor and their credibility in the eyes of the Karavan.