King Yrkanis (mateis: Yrkanis-karan) was the only son of the late King Yasson and later became ruler of the Matis.

Born in the year of Jena 2482 to King Yasson. He was born during the exile in the Prime Roots, during this dark time his birth gave rise to a new hope, in fact when a Matis capital was built in the New Lands during 2483 JY it was named after Yrkanis as a symbol of rebirth. Yrkanis was given a courtly upbringing away from the general populace and placed under the tutelage of the great organic architect, Lenardi Bravichi.

In 2493 JY during a trek to Zoraï contingent on the Fyros border, who had come to pay their last respects to the uma matalena (mateis for great warrior), Matini Roqvini, the young prince was confronted by three kipuckas, by chance the great Zoraï warrior, Leng Cheng-Ho was at hand and saved the young prince in extremis but at the cost of his own life. Leng Cheng-Ho's sacrifice would later play a very important role in securing the release of the Fyros Emperor in 2501 JY as the Zoraï negotiator was none other than Mabreka Cho, son of Leng.

In 2501 JY Mabreka only briefly met Yrkanis during the negotiations, during this meeting though Mabreka eased the prince's mind, by stating that Mabreka's father died in merit and had thus moved further on along the pathway of the eternal bliss of Ma-Duk. 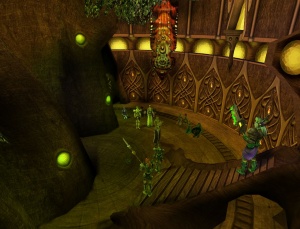 King Yrkanis meets with the Nobles in his throne room.

Only 3 Jena years later, Yrkanis was accused of the assassination of his father, King Yasson. During this time Jinovitch, younger half-brother of Yasson acceded to the throne and was partly responsible for forcing Yrkanis to flee the idyllic world of court and take to the forest with a handful of loyal followers. Thanks to the teachings of Bravichi, the prince easily settled into his new life in the wilds. He soon learned the land and the ways of the common Matis. For most of this time up until 2506 JY, Yrkanis travelled incognito and used his sense of persuasion and sound reasoning to rally Matis folk under his banner. He gained further popularity by stealing tithes, used by Jinovitch to finance his army, from the royal soldiers. His life in the wilds came to an end during 2506 JY when he made a bid for the crown after a Matis defeat against the Fyros, subsequently he was thrown in prison. Jinovitch himself allowed for the prince's escape to try and kill him during flight. Jinovitch's plot to kill Yrkanis was ultimately foiled though when Lenardi Bravichi informed the young prince of the ploy and explained how Jinovitch was the one who poisoned the late King Yasson. Bravichi helped Yrkanis escape, but was burned three days later at the stake, accused of heresy. Yrkanis, now 24 years old, swore revenge against his uncle for the atrocities but was again forced into hiding with his still loyal band of homins. For the next two years Yrkanis again slowly made his presence know through influencing the common homins. Jinovitch did not sit still during this time; he issued a warrant for his nephew's immediate arrest, claiming he had sufficient evidence to convict him of heresy.

In the year of Jena 2508 Yrkanis was finally caught in an ambush. On the way to the renamed Matis capital, Jino, he escaped thanks to a band of hearty homins, but he could not stay in the confines of the forest this time and flees to Fairhaven through the Prime Roots with the help of a Tryker from the Guild of Try. The newly elected governor and staunch enemy of the new Matis regime, Still Wyler. Together, Yrkanis and Wyler planned to muster a force to protect the Lagoons of Loria and bring an end to the Matis dictatorship. Back in Verdant Heights, Jinovitch declared the 'heretic' prince dead and offered the disfigured body of a partisan as proof.

Wyler left for a campaign across Lake Lands in 2509 JY trying to stir a fighting spirit among his people. The deputies of Fairhaven however did not allow Yrkanis to remain there and thus he was required to find refuge in Zora. During his stay in Zora, Yrkanis made an agreement with Mabreka whereby trade would resume as soon as the prince recovered the Matis throne, as well as to pass laws to forbid the persecution of the Kamis in the forest lands, in return Mabreka agreed to help Yrkanis pass Matis supporters to the jungles via the Prime Roots to build up an army. Yrkanis during this time learned much of the Zoraï ways, yet never faltered in his belief in Jena.

In 2511 JY, before the invasion of the Lagoons of Loria (renamed Jino Waters during the short period of occupation) in 2512 JY, the prince's followers risked their lives spreading word throughout the Matis controlled lands that the prince was alive and would come to rid Verdant Heights of the reign of terror. In 2512 JY, in response to the Matis invasion on the lakes, Yrkanis left Zora to join Still Wyler and his army at the frontier. The battle for the lagoons ended in 2513 JY when Jinovitch's army dropped to their knees upon recognising the colours of the house of Yasson and the painted faces of Yrkanis and his followers; thus the lagoons were taken back with little bloodshed. Jinovtich upon hearing this marched out from the Matis capital, Jino, immediately with his army of elite warriors and conscripts.

During Jinovitch's march to the frontier in what we assume was early 2514 JY, Jinovitch was killed; eaten alive by prowling kitins while his army just stood and watched. Wyler escorted Yrkanis to the capital, where he acceded to the Matis throne at the age of 32.

Thus far Yrkanis' rule has been one of wise rule, built on loyalty to the crown and Jena, trade competition and aesthetic achievement, so bringing the Matis to the prized values of Yasson and Lenardi Bravichi. He has promoted peace and signed the Homin Rights Act.

Yrkanis is a direct descendant of Zachini and the only son of the late King Yasson. He married the daughter of his late mentor, Lea Lenardi, in 2517 JY who gave birth to his heir and thus far only son, Stevano, a year later.