The capital of the Matis people, located in the Northwest corner of Majestic Garden.

Yrkanis was founded in 2483 right after the Matis first appeared in Verdant Heights. According to legend, the first foundations of Yrkanis were erected on the spot where king Yasson's arrow fell. The new capital was named after his son, Yrkanis, born in 2482 in the Prime Roots.

Yrkanis has remained as the capital of the Matis and the center from which they oppose their influence on the Verdant Heights ever since.

One notable event from the city's recent history was when it was invaded by intelligent plants in 2549. 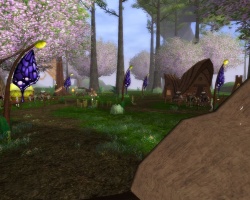 The Stables on a quiet day.

The city of Yrkanis, as seen on the right, is roughly the shape of a rectangle that is much longer in the north-south direction than it is wide in the east-west direction.

The city is split up north-to-south in several districts, all named after Matis kings of the past:

As one of the 4 capitals, Yrkanis is home to many. This a list of mission givers that can be found in the city, for a complete list of notable citizens see NPCs of Verdant Heights#Yrkanis