The Burning Desert is the primary location of the Desert ecosystem on Atys. It is controlled by the Fyros race, who have a huge city in the northern region of Imperial Dunes, as well as outposts in the south-eastern and north-western corners of the continent.

The Burning Desert continent is made up of 8 regions. Six of these regions are open desert with occasional oases, while the last two are huge scorched canyons that effectively split the continent in two, separating the 4 north-western regions from the 2 south-eastern ones.

The continent has 2 openings down into the Prime Roots, as well as direct routes to the Verdant Heights on the south-east and to the Witherings on the south-west. 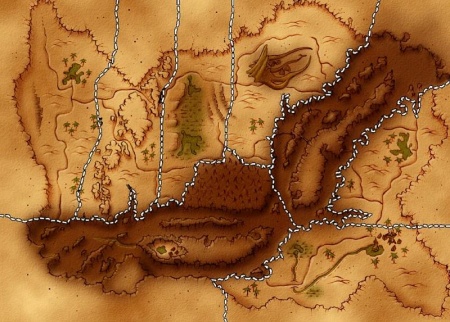 The great desert of Atys is a wind ravaged wilderness shunned by all, except the Fyros who have been prosperous in rebuilding their civilization there. Without doubt the most captivating place of all the desert is the great Fyros city which is also a most impressive fortress. Though the dangers are countless and oases rare, the keenest of spirits venturing into these hostile lands will be rewarded by the diversity of fine and precious resources such as the rare types of wood.

The Burning Desert is relatively sparsely populated with tribes. Except for the Scorched Corridor, each region only has one tribe settled in it, thus most tribes have complete hegemony over their region. The nature of these tribes depends on how far you are from Pyr. In the regions surrounding the Fyros capital the tribes are peaceful and either staunch or at least uneasy allies of the Fyros. The Leviers, Water Breakers, Frahar Hunters, Barkers, and Watchers will all offer their camps as sanctuaries to most travellers. Further out into the desert however, settle the tribes that are outright hostile to the Fyros empire. The Dune Riders and the Renegades are Fyros outcasts that will attack fellow Fyros on sight, while the Lawless and the Scorchers are little better than common bandits and attack any homins regardless of race. In the furthest corner of the Desert, the intelligent Frahar tribe known as the Fraiders tries to carve out a peaceful co-existence with homins amongst the savagery.