Nexus is considered the heart of the new lands and is the only region of the Nexus Minor Island. As the name implies it is a place where many things come together and indeed most of the Prime Roots regions have portals leading to Nexus. In fact, there is no other way to get to Nexus other than through the Prime Roots (apart using teleportation). It can be accessed:

The Minor Nexus was unique in that it was the only known surface area with the highest quality natural resources. They had disappeared, probably depleted, until the recent barkshakes brought them back to life. For this reason, it is a highly disputed territory [1], both by nations and by higher powers. 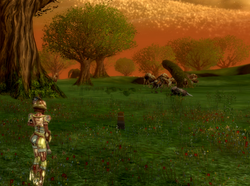 On Medis 22, 2e CA 2608 [2], Atys suffered intense barkquakes. They were felt first in the Knot of Dementia and Upper Bog regions. Terrified though they might have been, homins investigated and they quickly discovered that the Atysquakes' epicenter was located in the Nexus. At the paroxysm of the event, they gathered on top of the End of Destiny, thinking that the place name could be appropriate; the planet's coughs began to decrease though, and people could discover the chaos resulting from the catastrophe. Raisings, sinkholes (some of which rather deep), and even chasms had appeared. Some structures as the former abandoned outposts' ones had been swallowed and unusual material resources from various ecosystems became available to miners for a while. Many Fyros people immediately thought that Fyrak was the cause of the trouble and was going to show up. Nations, in accordance with the Superior Powers, sent their skilled scientific researchers in order to investigate the phenomenon, placed tags all over the Island and began to collect data on bark's movements. Marauders did not keep away from this activity and settled a camp of their own.
New sources of supreme quality appeared again in the following years in which particularly strong and aggressive groups of Gibbaï seemed to have a special interest. Fyros and tryker scientists therefore launched a collection of these materials. In 2611, Daeronn Cegrips then launched a large-scale campaign to study them in greater depth. This tedious task was entrusted to the Matis scientists, who after a certain lateness had finally arrived.

The Nexus in Literature

Complements to this page: