Majestic Garden is situated on the sub-continent of Verdant Heights. Years of matis presence has made this forest one of the safest on Atys, safe enough for the novice to begin to cut his or her teeth. That said, Majestic Garden does harbor a host of potentially dangerous animals.

Another interesting feature is the arena where homins come to match their might and wit, and near which the merchant tribe of the Green Seed (the only tribe in the region) often sets up camp.

Being one of the first regions of the newfound lands to be cleared, Majestic Garden benefits from a judicious network of bollards that sprout from the ground. These bollards mark the way between town and village allowing the wayward traveler to quickly pick up the lost track.

Altars of the venerated Karavan will be found inside towns and villages. Kamis have a single altar established outside the capital.

Majestic Garden takes its name from the beautiful gardens near the ancient capital of Matia. These gardens were elaborated under the reign of King Noblis and constituted one of the wonders of the ancient world. After two years of Prime Root confinement, it was no wonder that Majestic Garden were the first words that came into King Yasson's head on beholding the enchanted forest likened to that of his cherished homelands.

The new capital was soon established and named after the new born Matis Prince, Yrkanis, as a symbol of renaissance. Added to this came the villages of Davae, Natae and Avalae, named after the first three female babies born in the Matis colony of the Verdant Heights. The region also shelters a single outpost aptly named Psykopla Knoll Trading Post.

As mentioned, Majestic Garden harbors a host of dangerous animals including Ragus (will attack you if you catch their eye), Yubo, Bodoc, Capryni and Gingo. The only species of kitin present in the region is the Kipee, a peaceful and social herbivore which can be observed munching away at the lush vegetation. Among the flora, the most spectacular is the gathering of Psykopla plants clustered on a mound and bound to intrigue the inquisitive eye. 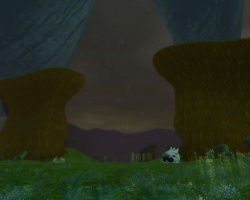 Entrance to the Matis Arena

Originally planned by the rebel king Jinovitch to be a training ground and stronghold for his knights, it was never completed after he was ousted by the current king Yrkanis, with the help of the Tryker federal army during the battle for Loria. Now it serves as a place for warriors to settle their disagreements in mortal combat, and as a place for friendly duels.

A spectacularly large structure, it sits off the crossroads on the road from Yrkanis to Natae. Its entrance is guarded by a massive skull of some unknown and probably extinct animal.

If ever completed, it would be one of the largest homin made structures on Atys (after the Pyr city walls).

A group of lush hills near the border with the Knoll of Dissent which in season is overgrown with a large concentration of psykopla. At these times, the local bodoc gather there to feed on these plants, under the watchful eye of a particularly spectacular specimen named Bodokin by the locals. 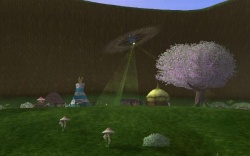