Obsolete Page
This page is archived under Category:Obsolete.

The Ring is Ryzom's system that allows players to create their own scenarios and host them for others to play.

Without getting into the concepts of actually creating a Ring scenario (that's advanced concepts), this guide will aspire to tell you everything you need to know to play the Ring scenarios created by other players.

To join a scenario hosted by someone else, first you need to go to a Ring Terminal. There's a Ring Terminal at the main gate of all of the 4 capital cities, (Fairhaven, Pyr, Yrkanis and Zora), as well as on Silan. Ring Terminals look like this: 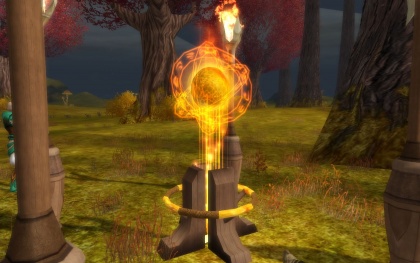 Select the Ring Terminal and you'll get the option to "Enter the Ring." Click or double-click (depending on your settings) to do this. 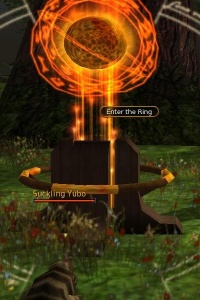 This opens the Ring Destinations window, seen below. Most of the time, the list will be empty, and you'll see "No scenario found" displayed in red letters. This means nobody is currently hosting a Ring Scenario.

If there is a scenario currently being hosted, the window will look like below. The columns display various information about the scenario, like who's hosting it, what it's name is, etc. Note the green symbol next to the eye in the first column; this means you can join the scenario right-away, without needing an invitation.

If the scenario does not have the green symbol, then selecting the scenario will present you with a greyed out "join" button, as below. In this case, you'll need to click the "ask for invite" button to receive an invitation.

Try to ignore the columns that display "difficulty" and "type". Many players look at these columns and decide the scenario is not right for them, while in truth the data displayed here is almost always woefully inaccurate. The only way to find out what the scenario is really like is just to try it. Don't worry, there's no death penalty.

Because there's almost never someone else hosting a Ring scenario, often the best way to play a scenario is just to download and run them for yourself. Some creators make their scenarios available for download. To find scenarios to download, check out the List of Ring scenarios or the [Ryzom Armory].

Ring scenario files have the .r2 extension, but usually if you download one it'll be packed up as a .zip or .rar file. Unpack this file, then go to your Ryzom directory (the same one your screenshots are kept in). You should see a folder called "my_scenarios". If it's not there, you may have to create it. Move the .r2 file into this directory.

Probably, the list will be empty as usual. Now, click on the big green "New Destination" button.

This will bring up the "Load Scenario" window, displayed below. Now to find the scenario you just downloaded... 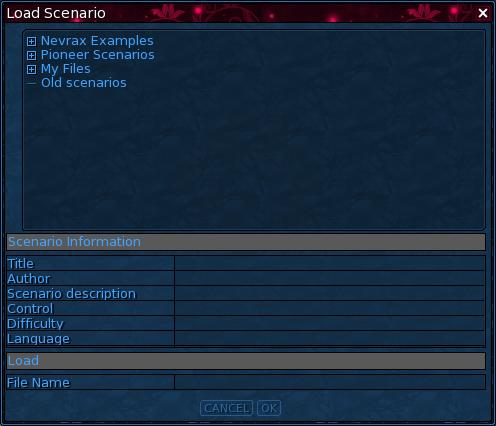 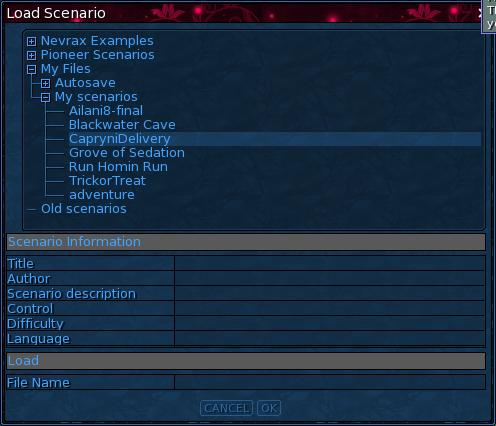 Click on a scenario to select it, and the lower half of the window will display various info about it. Most is fairly self-explanatory. Specifically note the "Control" category; if this says "Masterless" you will appear in the scenario as a player, if it says "Mastered" you will appear as a GM. If you're satisfied it's the right scenario, click "OK". 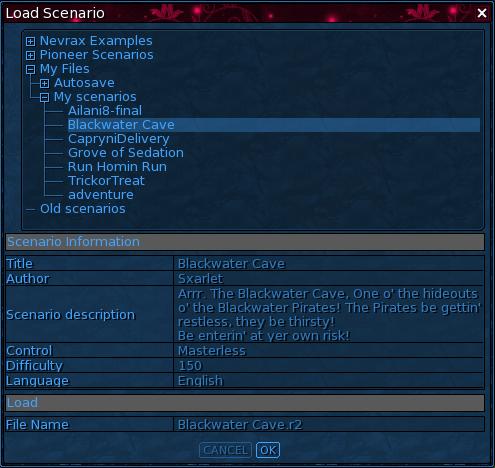 At last, this will bring up the "Listing Options" window, shown below. All the checkboxes here affect purely whether or not other players will see your scenario at Ring Terminals. They have no effect on your playing experience, and anyways you can still change them at any time after you start the scenario. 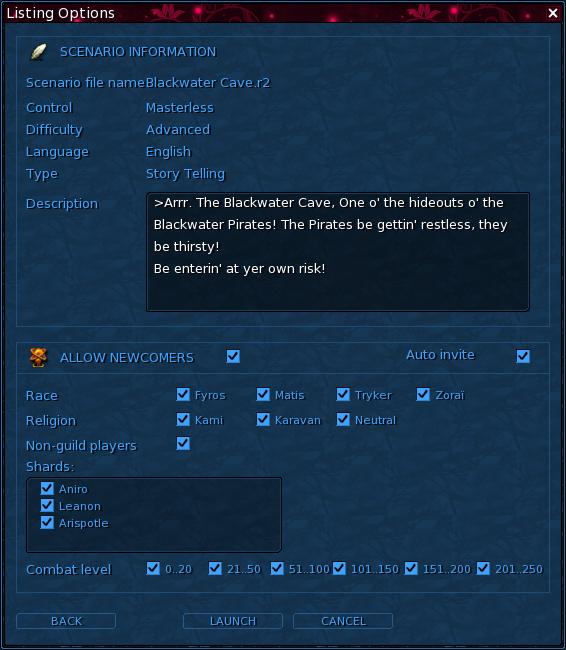 If you want to play undisturbed by other players joining you, just uncheck the "ALLOW NEWCOMERS" box, and all the other options will disappear. If you want to allow some friends in but not random players, uncheck "Auto invite" and only players you invite will be able to enter.

Finally, click the "Launch" button to be taken inside the scenario of your choice.

An often heard question from people trying a Ring scenario for the first time is "how do I leave the Ring?" - it's not straightforward, but you just have to know where the button is.

If you've joined someone else's scenario

If you've joined a scenario hosted by somebody else, you can leave by clicking on the same "Quit" button you usually use to close Ryzom (or press ALT-F4). In the Ring this will bring up the following menu: 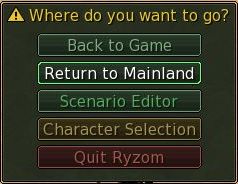 Then just select "Return to Mainland" to leave the Ring scenario and return to the normal Atys.

If you're running a downloaded scenario

If you're running the scenario yourself, you should have the following menu somewhere in your screen:

The button in the middle gives you the "Listing Options" window shown earlier again, the button on the right shows you a list of all other players in the scenario, and the button on the left is the one you use to leave.

If you're running the scenario in GM-mode, you don't have this menu, but you can find the same option in the main menu instead: 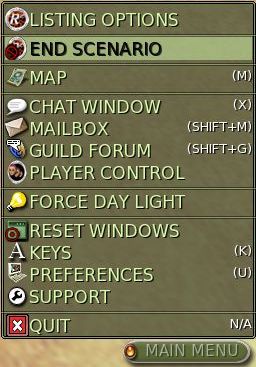 Clicking either button will give you a confirmation window:

On which clicking "OK" will bring you back to normal Atys. Note that since you're the one running the scenario, this'll also close the scenario and kick out any other players that may be in there.