Teleporters are special devices created and governed by the two conflicting higher powers of Atys. Whether you are able to use a teleporter is dependent on your fame and alignment with either one of these two factions. Each region of Atys has at least two teleporters; one belonging to the Kami and another belonging to the Karavan. Every capital region have a teleporter in each city and only a single teleporter for the opposing faction in the region. Rangers have a special access to higher level regions (250), and Marauders have their own teleportation system (Zinuakeen).

Teleporter Pacts or TPs are tickets that can be bought at the destination altar. Teleporter pacts cost depends on region level and on character's faction fame. Depending on the alignment with either of the two higher powers or neutrals, a character has an access limited to a subset of the teleporter pacts; Marauders have none.

(*) Teleport pacts are given by the advanced occupations masters. The way back to (visited) Capital cities is free at the teleporters.

Teleporter pacts have special rules for use, below is a summary of these: 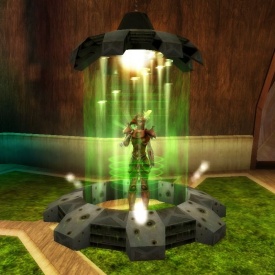 In Patch 1.12.0 new teleport animations were introduced, these are shown when activating a teleporter pact, however only characters with either a 100 Kami or Karavan fame have access to these animations.

Retrieved from "https://en.wiki.ryzom.com/w/index.php?title=Teleporter&oldid=39899"
Categories:
Hidden category:
This page was last edited on 5 November 2020, at 16:32.