The Youth of Loria

The Audacity of Loria [1]
Narrated by Ailan Mac'Kean, granddaughter of Loria.

As the courageous leader of the Guild of Try has explained to you, my name is Ailan Mac'Kean. One of my ancestors was the great Lady Loria. History is transmitted in my family from parents to their children, and in this way our history has persisted through the centuries. I am happy to be able to tell it to you.
Listen well, Homins... this is part of your history as well!


Loria was the only girl raised in a humble family of rafters. All day long, instead of doing the chores her aunt had given her at home, she played and watched her cousins pushing logs up the river. Despite the reprimands she received, she could always be found by the river. Loria was full of energy, joyful and free as the wind, chasing after yubos and crossing rapids better than any boy. One fine summer day, as she jumped across some stones in the shallows around Barley Bay, she stumbled over an unstable stone and discovered a crevice in the ground about two feet wide, just big enough for an eleven-year-old girl to squeeze through. She ventured into the crevice and descended along a great root in the soil, arriving, much to her surprise, in a cavern full of ancient ruins. 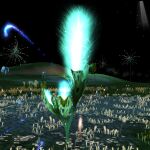 With a pocket full of the white coral stones that she had collected along the lakeshore to mark her trail, she explored the enormous rooms all afternoon, using the bright glowing flowers she found there to light her way. The following morning, instead of going to school, she ran to the temple and entertained the elders with stories of caverns and strange glowing plants. The old sages joked about her exuberant imagination, but the next day, she had a surprise for them. Offended by the elders' mockery, Loria brought back three beautiful plants to the temple. The elders could hardly believe their eyes and they asked Loria to show them this cave.


When they approached the crevice, the elders were appalled to learn that Loria had ventured into the forbidden Prime Roots. She had broken the Law of Jena, and if the adherents of Jena ever learned of her transgression, they would come down on her like a ton of bricks. Loria was confined to her house for twenty days and the entrance to the cave was sealed with muck and loam. Her imprisonment taught Loria a precious lesson: she would not go back to the crack, but she would say nothing if she ever discovered another one.

One day, there was a terrible accident at the lake. Her cousin Bodley had fallen and bashed his head; he had been found at the lakeshore half-dead. He desperately needed one of the precious seeds of life, but his family was too poor to buy them and too proud to accept charity. Loria knew that Tryker traders sometimes sold the flowers of their lake to the Matis and she knew they would pay handsomely for the rare glowing flowers.

With a knapsack full of coral stones, she went back to the crevice and descended once again into the Prime Roots to explore more of the galleries leading under the great mountain that separated the vast Matis forests from the Lakelands. Soon the air changed, refreshing itself and taking on an entirely different smell.

Seeing a point of light at the end of a tunnel, she heard chattering in an unknown language. She cast a furtive glance and there, in a pool of clear water encircled by tall trees, she spied a group of young women bathing. At the side of a bush, she saw strange and beautiful clothes; she could not help but touch the cloth from which they were made. She picked up a huge shoe as it sparkled in the sunlight, and inside it, she found the most beautiful seed box she had ever seen.

She opened the seed box, made from coral and mayleaves, to find the answer to her prayers: three precious seeds of life. The chattering became louder. With barely any time to think, she grabbed the seeds and left the glowing flowers she had picked along the way as payment before running at top speed back toward the entrance to the cavern. Hidden behind a bush, she watched the scene and the astonishment on the faces of these tall ladies, who she later recalled were Matis. She also realized that she had walked under the big mountain for only two hours before reaching the Matis territory, which normally took an entire week through the mountains.

When she returned home, she crushed the precious seeds and poured the powder into Bodley's tonic so that no one could guess what she had done, as she was afraid of being grounded for having violated the law enforced by the Karavan, disciples of Jena. The next morning, she returned to the cavern under the great mountain. Around the cool and clear pool, she saw the beautiful box open and filled to the brim with seeds. She waited to be sure that the way was clear and that it was not a trap. She began to throw the precious flowers near the box of seeds, but when no-one grabbed them, she rushed over to take the seeds and returned again to great mountain and home again to tend to her injured cousin.

There were enough seeds for five days of treatment and he began to recover, but then there was a heatwave and Bodley became feverish. Loria returned to the cool road of the Prime Roots, picked some flowers and went back to the place where the Matis girls bathed. No-one... She left a single flower in the usual place, hoping that the girls would come back the following day so that she could get more seeds.

The next morning, she set off again, her heart heavy with anxiety but full of hope. Arriving at the place of the bath, she saw to her great relief the box full of the precious seeds. She hurriedly repeated her careful actions of the previous day and then took the box. As she turned, she thought she would faint. The way was blocked by an old Matis sage accompanied by two girls! Even worse, two men were slipping behind her with a net. From what she could understand, the old man said to her that she could not return through the Prime Roots, because he used words "Jena" and "Karavan", which are the same in all homin languages, and he had the same expression of reprimand as the elders of her village.

But Loria was not in the mood to listen to a lecture. As a diversion, she threw the flowers at the girls, pocketed the box of seeds, dived across the legs of the old man and rushed as quickly as she could into the bushes and back towards the cave. Once again at home, she gave the precious seeds to her suffering cousin who recovered fully.

She continued to turn logs for many years, and ever since then, the family always succeeded in making ends meet somehow. As for the box of seeds, Loria hid it away from everyone because she knew that someday, the seeds would prove useful. But this... this is a story for another day...