Difference between revisions of "Event:Peaceful Resolutions" 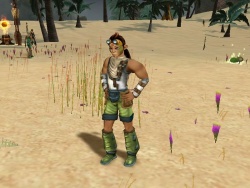 This poor guy's marriage is at stake here!

In the first cycle of Jena Year 2554, the Smugglers and the Lagoon Brothers, two tribes of Aeden Aqueous, went to war with eachother. However, nobody outside the tribes really noticed except for a Tryker merchant whose business got caught in the middle.

Instead of bringing his problems before the Taliari, the merchant decided to entrust this task to a group of random volunteers. In the end mostly Matis responded to the call, and they went about fixing the issue as Matis usually do; through lies and subterfuge.

Though they did manage to resolve the direct conflict, it's likely the Matis only planted the seeds for more future conflicts in the process. It's unknown whether they were pursuing any personal agenda throughout the ordeal.

I hope this letter finds you well and that you are enjoying your retirement in the Burning Desert. The Lakes are as beautiful as ever and, as usual, I can be found enjoying the sunsets with my dearest at one of the many waterfalls.

I had hoped to propose to my love this past Atysmas. Unfortunately, the disturbance between two tribes has left my mercantile business in a bit of a shambles and I have not been able to procure the dappers or resources needed to obtain the engagement ring she fancies.

I will be returning to Fairhaven to purchase some new packers and go through my remaining storage to see if there is anything I can salvage. I fear that it will all be for nothing if the situation between the rival tribes is not sorted out quickly. I think I will ask for help of the homins I meet in Fairhaven upon my return.

Ba'Tylos asks the crowd for help.

A crowd of eager volunteers waited outside the Fairhaven stables for Ba'Tylos Eoffer's arrival, to hear out his explanation of the situations and his plea for help.

Emissaries were immediately sent to the camps of both tribes to talk to the tribe chiefs and find out what the trouble was about. They found out the Lagoon Brothers had not returned the Smugglers' spoon, and that the Smugglers had not returned the Lagoon Brothers' yubo plushie. Cross-inquiry further revealed both items had been passed on to wandering merchants instead. It's as if these tribes were just looking for an excuse to go to war!

Negotiating with the tribe.

The merchant who had received the Smugglers' spoon from the Lagoon Brothers was tracked down to the camp of the Silt Sculptors, but had already passed the spoon on to his cousin who was preparing an expedition into the kitin lair in Knoll of Dissent. The homins found him still in his camp, and he agreed to return the spoon in return for the necklace he had lost in Lagoons of Loria. This necklace turned out to be found by the Cuzans, but luckily the Cuzan who had found it immediately fell in love with one of the Matis women in the party and gladly gave her the necklace.

Okay little fella, give us the necklace...

The merchant who had received the Lagoon Brothers' yubo plushie from the Smugglers was tracked down to the camp of the Beachcombers, but he had already passed the plushie on to his niece who was a brewer working from Resting Water. She agreed to return the plushie in return for some very rare flowers that had recently been obtained by a certain Smuggler. Luckily this Smuggler turned out to be madly in love with her and gladly donated the flowers for this cause, to which the party repaid him by telling the girl he never wanted to see her again, but only after they'd received their plushie. That's Matis gratitude for you.

It remains to be seen if relations between the tribes were actually smoothened or if the Matis only sowed more discord throughout the lakelands in their ruthless quest for the lost items.