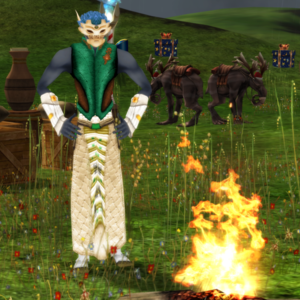 A tale while walking Atys

Some time ago, someone I hold in high esteem asked me for a tale of Atysoel for this vigil. At first I was quite embarrassed: I don't know how to make up stories. So I searched my memory if I could remember something that you might like. But the stories that came back to me you probably already know them... So I decided to go back to the source of these tales. After my Mask ceremony, I spent a lot of time on Silan, and that's where I heard the best stories.

So I went back to Chiang the Strong to ask his advice. We talked for a while. Then he had an idea, which he didn't want to confide in me at the time:

“Come back in a few days, he said, and you'll have a story that hasn't been told for a long time!”

I went back to see him a few days later, eager to hear this tale.

“Patience, Chiang told me. Before you have your story, you need to gather certain elements.”

And he gave me a list of people to go see. You know Chiang; he didn't give me the list all at once! I would go to the mainland to find the person he had designated for me, I would come back, then he would give me another name, and I would go again. Maybe I would have seen the catch coming if he had told me the whole list at once. But I'll spare you the details of these round trips...

The first was a priest of the Temple of Zora. I introduced myself to him, and we discussed the Kami faith and the greatness of Ma-duk, until finally I could discuss the subject of my visit. He then spoke of his own visit to Silan years before and the pleasure he had had in traveling through this island blessed by the Kamis. Finally, he handed me a small package, with the instruction not to open it without Chiang's agreement.

And he concluded the exchange with these words:“The course of Light can take many paths.”

The second was a Fyros. I found him at Lydix' bar. He was an old warrior, worn out by a thousand battles for the glory of the sharük, who grumbled about the failure of young men to serve the Empire with loyalty. When I was finally able to come about the why of my visit, he handed me a small package, with the same instructions, and confided to me:

“There is more than one way to be loyal and to serve.”

The third was a Zoraï homina, a herbalist whose tent contained many strange plants. What she made me drink for sure was not a simple tea.

“It is the dose that makes the poison… or the remedy.” She explained to me before giving me a spicy smelling package.

The fourth was an homina, too, a former Marauder who had grown up in a clan of the Old Lands. She now lived as a hermit in the heart of the Prime Roots, and received me almost kindly. She gave me the package after having made me face a tyrancha with bare hands. The tyrancha won, but the homina lifted me up and honored my courage by handing me the object of my quest. She accompanied its giving with these words:

“What matters is to fight valiantly and for a just cause.”

The fifth was a Tryker, a crafty trader who had already relieved me of a lot of dappers these last months. He insisted on playing cards for the package. Of course I lost, again and again, until he took pity on me… He let me go home pockets empty… but with the package and a mockery :

“It doesn't matter the bottle, as long as we get drunk in good company!”

The sixth was a Matis homina. She was a great lady, a former courtier to the Karan, who was spending her old age teaching elegance to the aristocratic youth of Yrkanis. She made a little fuss at receiving me. Yet I had donned my best clothes! Finally, she agreed to entrust me with a small package for Chiang. Before I leave, she said to me:

“Even if some people don't know anything about good manners, that doesn't prevent them from doing good... and that's already enough.” I hope she wasn't talking about me?

The seventh was a female officer of the Karavan. I was a bit worried about approaching her, given my allegiance, but the Kuilde let me pass this time, and I got the package without being too shoved. She said to me: “Jena considers all homins as her children, even those who get lost for a while. And some will always have her support, even if they are not the most pious.”

I preferred not to linger and return quickly to Silan. I wondered if Chiang would make me run for a long time more... but the officer had been the last one!

He handed me the packages, all wrapped in various colored papers, and let me open them. They were the various elements of an ornament and two daggers, and on each piece was engraved a message, an echo of what everyone had told me.

“What about the tale, Chiang?' I asked.
—What did you learn from those walks?”

I ponder, and I understood. Thanks to him, I had met people from all factions and all nations. All of them had been on Silan at some point in their lives and had kept some memories of it. Everyone had also committed themselves in one way or another for the Bark. Finally, everyone had participated together in the Chiang project, in their own way. Beyond what could set these homins against each other on a daily basis, they were capable to unite their efforts in certain circumstances.

for all the homins to unite on Atys, without even denying their values…