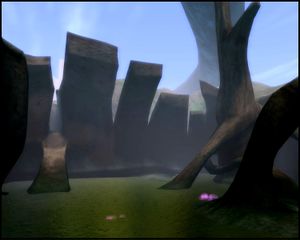 Darkmoor is a locality of the Liberty Lake located at Aeden Aqueous.


It's an environment that is very different from Liberty Lake. It is a swampy, humid, dark area with a suitable biotope. Wandering in this place can be dangerous, the atmosphere is oppressive, "pockets" of Goo are scattered in this nauseating cloaca and it is the only region where the stingas are aggressive.

Dark moors shelter roots among those that join the canopy. It is one of the places where these marvelous roots emerge, but particularly obscure because these same roots shelter it, the same ones that will one day form an additional layer of the Prime Roots, having totally covered the Bark we know.
The creatures have deserted this insufficiently illuminated place, but there is every reason to believe that it will be the creatures of the Prime that will later ascend there. The flora is already beginning to change, halfway between those of the Lakes and those of the Prime Roots. The dark zone is no longer of interest to the Trykers, who prefer the bright sunlight reflected in the shimmering water and the warm sawdust when they leave their boots on the beach, so they hardly ever go there anymore. This is why the Powers have long since turned their eyes away from this place.
It is said, however, that a small camp of homins is hidden there, at the very foot of one of the roots, or in a cave, according to the legends, living in harmony with Atys and detached from the belligerents. 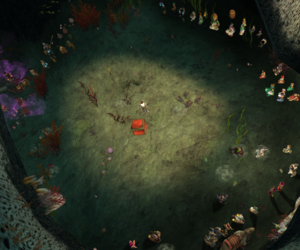 In the cave, the Black Market takes place.