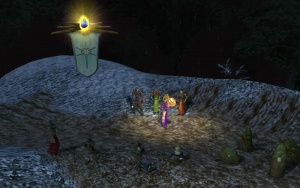 The Awakening, led by Mabreka Cho.

In the winter of the first cycle of Jena Year 2552, the government of the Zoraï for the first time began accepting new Zoraï Initiates into the ranks of the Awakened. (See player governments.)

The other nations had been accepting new citizens into their governments for years, but the Zoraï had lagged behind, as they were waiting for the right time. As the Zoraï citizen guilds became impatient with their lack of influence in the government, and began organising protests, that time finally came. Before the first Initiates could reach Awakening though, they had to embark on a long journey of learning through the Jungle.

This event officially introduced the Zoraï player government; the Awakened. 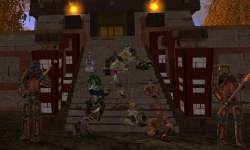 Silent Sit In in Zora.

But during Jena Year 2251, the Zoraï guilds started calling for more influence in their government. At first it was just individual guilds sending petitions and protests. Then as the fourth cycle of the year came around, the Zoraï guilds banded together into the Zoraï Coalition to make their voices heard as one. They secured the support of the 3 existing governments, and in the autumn of the cycle they culminated their protest in a Silent Sit In on the temple hall in Zora.

The Zoraï Coalition is hosting a Silent Sit In on Sunday, August 1st, at 0:00.

The Zoraï Coalition member guilds are ready and waiting to participate in a player run government. We feel it is time the Witherings had representation as the other civilizations do, and are joining in protest to show our solidarity.

We invite any and all concerned citizens to join us in our protest.

Almost exactly a cycle after this Silent Sit In, in the autumn of the first cycle of Jena Year 2552, they received the announcement they had been hoping and waiting for.

Mingled with a sense of frustration and satisfaction, Mabreka Cho read the last minutes of the assemblies of Zoraï Circles. He was pleased to see the Zoraï Circles form, but it has now been many years and it is clear that they would prosper more if they were no longer guided. Heralding his calling, he decided it was time to do his duty towards these Initiates ... No, these Awakened who had worked towards enlightenment for the Witherings.

The Zoraï Initiates walking calmly through the Jungle.

The interested Zoraï Initiates gathered at the Temple Hall in Zora, where they were met by Wan Fai-Du, one of the current Zoraï Awakened. He explained to them that the path to become Awakened was a long one, and as part of this journey, they all would walk throughout the Witherings and talk with various wise Zoraï. Each one would offer them words of wisdom to contemplate, and by understanding those words they would become closer to Awakening.

Thus Wan Fai-Du Du led the entire party as they walked calmly from pond to pond. At each pond they met a wise Zoraï, each one representing one of the five Circles of Zoraï government, and with each one they spent some time contemplating wisdom before moving onto the next. They met Chan Ji-Cian at Still Waters and learned about the Construction Circle, Kiei Xuan at Mektoub Waterhole told them of the Dynastic Circle, Me-Quong Dangi at Maiden Pond represented the Exploration Circle, and Lian Dao of the Defense Circle awaited them at the unnamed lake at the border of Haven of Purity and Maiden Grove.

Then for the last leg of the journey, they decided to run to Fowling Lake to meet the famous Zoraï Sage known as Sorrow. Sorrow gave them their final words of wisdom to consider, introduced them to the Spirituality Circle, and then led them to the top of the Great Boulder Tunnel. There, the equally famous Zoraï Sage known as Season awaited along with Grand Sage Mabreka Cho. Mabreka Cho told the Initiates that they had all shown great understanding, but that only one of them was ready to be Awakened.

After the Awakening of this Initiate, Mabreka Cho told the others that though they were not ready yet, if they continued on their path they too would become Awakened one day. After the Sages had all departed, Wan Fai-Du explained that from now on there would be regular meetings of the Awakened, during which all Zoraï Initiates would also be welcome to attend and have their voice heard.

Before the year was over, the first Awakened would be joined by 4 more, and they would receive an unusual welcoming gift.

The Awakening and Awakened - Report of the event on the Zoraï Coalition forums.