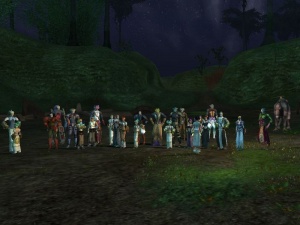 Diplomacy at it's finest!

In the first cycle of Jena Year 2552, the Awakening had finally given the Zoraï a participative government in the form of the Awakened. In the second cycle of that year, their Matis counterparts, the Nobles, decided to welcome their new colleagues onto the political scene with a diplomatic gift of bouquets.

Florists of the Verdant Heights had to work hard to collect these bouquets and the maintenance supplies required to transport them, and several diplomatic and bureaucratic hurdles had to be taken, before the Flower Caravan could finally be on it's way in the third cycle. Despite it's escort finding out the hard way that the scent of flowers attracted every nasty beast from a 100 meter radius, the caravan reached the Witherings safely and the Zoraï government was much content with the gift.

(This event was entirely initiated by the player governments, with the official event team reacting to their actions.)

Buildup for this event began around Thursday, 2 September, 2010.

The Matis chamber of Nobles decided on their plans for a diplomatic gift to the Awakened in a meeting with Duke Rodi di Varello on the first day of Floris, in the second cycle of Jena Year 2552. [1] The gift was decided to be one hundred of every type of bouquet in existence. Cuiccio Perinia, the Royal Botanist, was put in charge of overseeing the operation.

The call for florists to collect the bouquets for the gift was sent out by the Royal Herald at the end of the summer:

Attention florists of the Verdant Heights! Your flower bundling expertise is needed as the Nobles wish to present the newly Awakened with an aromatic gift of fragrant forest flowers. The Nobles desire the following for their gift.

The Assistant Botanist will be stationed outside the Master Florist's building to collect the bouquets and certificates at irregular intervals.

The Nobles at the Taliari Assembly.

As announced, the Assistant Botanist regularly appeared near the Florist's building to collect the donations. Bouquets were donated generously, and by Frutor 16, halfway through autumn, all 700 bouquets had already been collected. The maintenance certificates required to preserve them proved harder to come by.

Meanwhile a Taliari assembly was held on the last day of Harvestor, so the Nobles attended to ask permission to move a caravan through Aeden Aqueous to bring the bouquets to the Witherings. This issue was politically sensitive as the Nobles had previously refused a Tryker caravan to move trough Matis lands. But the Taliari decided after much debate that nobody would benefit if refusing passage became the norm, so they gave the Nobles permission to move their caravan through Aeden Aqueous in return for a token apology for the earlier blockade. 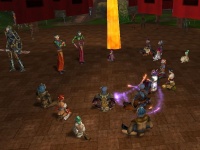 Atys passed into a new cycle while certificate collections were still ongoing, and the Matis were still waiting for word from the Zoraï government on whether they'd even accept the gift.

The Awakened finally had their very first assembly since the Awakening on Winderly 10 of the third cycle. [3] At the assembly, 4 new Zoraï Initiates were given the status of Awakened, bringing the total number of newly Awakened to 5. The Awakened then decided they would not only receive the caravan, but would personally join in escorting it from Yrkanis to strengthen the bonds between them and the Nobles.

With the final bureaucratic hurdles cleared, the Nobles and Awakened decided on the final date for the caravan to be exactly 4 months later, on Medis 10, in the middle of summer. Even though not all the required certificates had been collected yet, they did not want to wait any longer. The Royal Herald made the announcement:

Attention Vassals and friends of the Kingdom!

The caravan containing the fragrant gift for the newly Awakened will leave promptly from Yrkanis gates at 18h on Quarta, Medis 10, 3rd AC 2552(JY)*. Any who wish to aid in the escort of the caravan are welcome to ensure the safe arrival of the gift to the Jen-Laï Research Center. 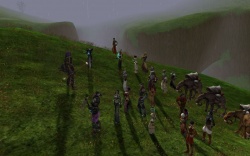 Meeting Chan Ji-Cian at the border.

The caravan left Yrkanis as scheduled, escorted by the Nobles, the Awakened, and several volunteers. To run the actual caravan, the Nobles had hired a trio of Matis famous for their packer caravans: Villi Frebi, Bezzo Rosi and Cigno Zazzo. During the first safe part of the journey, they entertained their escorts with constant bickering amongst eachother, to the annoyance of some and the amusement of others.

As the caravan and escort crossed into the more dangerous Heretics Hovel, it became clear that the scent of the flowers attracted predators and kitin even from up to a hundred meter away. This made it impossible to move around the predators' hunting grounds as travellers usually would, and the escort had to cut a swath of death through Heretics Hovel. This pattern continued after they crossed the border into Lagoons of Loria, and the kitin there were an even greater challenge to the escort. After many close battles they finally made it to Avendale. 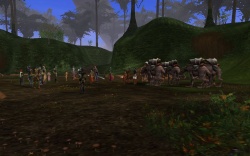 Fortunately they could then take a breather as the next leg of the journey was a long swim through the safe waters of Liberty Lake. Then Bounty Beaches provided a new challenge, as the scent of the flowers also turned out to attract the hordes of cutes. Though not particularly dangerous, there were so many of them it took the caravan a long time to get through. The underground Trench of Trials was almost easy to navigate in comparison, though there also the scent of the flowers attracted all nasties in the vicinity.

Climbing back out of the Prime Roots, the caravan was greeted at the border by Zoraï Sage Chan Ji-Cian. He requested that now that the caravan was passing into Zoraï lands, an Awakened would take the lead. The Nobles handed over the lead and the rest of the journey to Jen-Laï Research Center proceeded quickly and smoothly.

Unfortunately the Floris bouquets had not survived the journey, as not enough maintenance certificates had been gathered to preserve them. But a hundred of every other type of bouquet remained to serve as the gift. The Nobles handed the bouquets over to the Awakened in a small ceremony at the outpost. A group picture was taken, and fireworks were set off to celebrate. The celebrations lingered a while after that as some homins had to return home immediately and others staid a little longer to party. 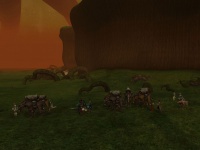 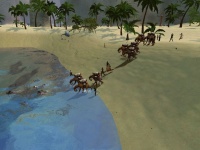 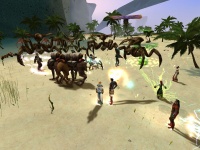 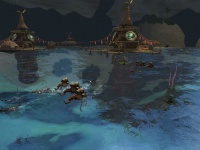 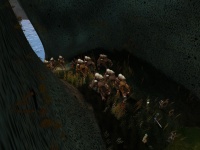 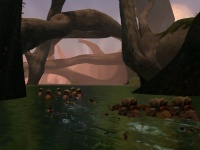 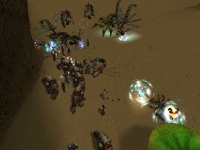 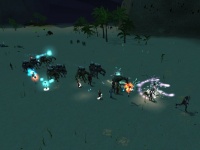 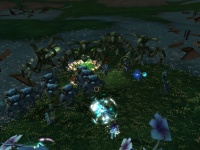 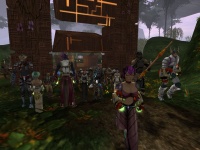