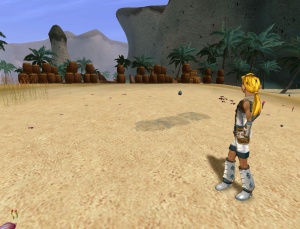 A Water Company Operator oversees the water barrels that are stacked up awaiting transport.

In the summer of the first cycle of Jena Year 2551, a terrible drought hit the Burning Desert. The inhabitants of the desert began running short on water, and the Fyros government had to request extra shipments of water from the Tryker.

Water-Carriers of the Tryker Water Company and from all over Atys laboured for a month to gather the necessary 255 barrels of water for the first delivery, which was to be transported from the lakelands to the desert through the Verdant Heights. The Matis disagreed with this however, requesting compensation for allowing the water caravan passage through their land.

Tensions rose between the Fyros and the Matis, and the Matis briefly closed their border. To prevent escalations, the Tryker government decided to lead the water caravan to the desert through the Prime Roots instead. The caravan reached it's goal safely and the situation defused. Only lingering tensions remained.

Buildup for this event began around Wednesday, 2 June, 2010.

As summer began and the drought became evident, the Fyros Akenak sent a request to the Tryker Taliari for an emergency meeting between the two governments to discuss possible solutions to the Fyros' need for extra water.

The Akenak will meet with the Taliari (or representatives) at 22:00 GMT on Wednesday, June 2 at Frogmore Place in FH. It is important that the GL or a HO representative be there for all Tryker guilds.

The Akenak and the Taliari met at Council Chamber Square in Fairhaven to discuss an agreement. The Akenak representatives explained their calamity and asked the Taliar to deliver them large shipments of water every 6 months until the drought would end. The Tryker, ever the philanthropists eager to help any homin in distress, agreed to deliver the water at no extra cost to the Fyros.

An operation to gather the necessary water was quickly set up, and a call went out to all Water-Carriers to help gather the required amount of water:

Citizens of the Federation and interested parties! The Akenak have asked for assistance in acquiring water for their constituants, who are experiencing a major drought. Helping with their request will be a great undertaking and will require homins who have the Water-Carrier occupation to gather components to prepare the water for transportation. A minimum of 255 small barrels has been stipulated as required by the various tribes of the Desert.

Bresky Mac'Naroy will periodically collect the components needed to assemble the shipment for transport using the provided conversion chart.

All components must be turned in by Tria, Harvestor 15, 1st AC 2551(JY) to allow ample time for packaging.

Any homins wishing to assist in the transport (supplying packers or acting as security) are to meet Bresky Mac'Naroy at Watergate Border Post in Lagoons of Loria. Please plan on bringing your packers early to have enough time to secure the loads. The caravan is scheduled to leave at 13h on Tria, Frutor 3, 1st AC 2551(JY).

But at the same time the Akenak was meeting the Taliari, the Matis Chamber of Nobles was holding a meeting of it's own. They too had heard of the Fyros plight and the plans to import large quantities of water, specifically through their forests. Feeling less philanthropic, the Nobles decided they wanted a gesture of appreciation from the Fyros before offering their help. 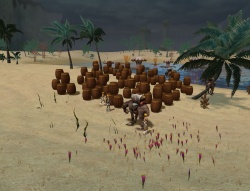 Water Barrels piling up in Fount.

Enthusiastic Water-Carriers from all races set out to gather the 255 barrels of water for the first shipment. Bresky Mac'Naroy regularly appeared near the Shipment Board to collect the donations, and posted updates on the status of the collections throughout the month:

Meanwhile rumours were starting to spread that the Matis planned to tax the caravan for travelling through their land. With the first shipment ready to be transported and tensions rising, the Taliari set up a meeting between all 3 governments involved to attempt to reach an agreement before transport would start. This meeting was again to take place at Council Chamber Square in Fairhaven. 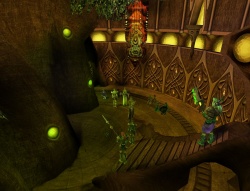 King Yrkanis meets with the Nobles.

Before the meeting started, the Matis King Yrkanis made a brief public appearance to instate some new Nobles and be informed of the situation. 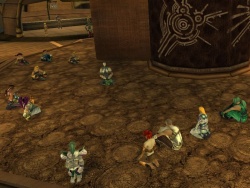 The Akenak, Taliari and Nobles then met in Fairhaven as planned to negotiate an agreement. It was the first time in years that 3 of the governments met, but the negotiations were particularly short lived. As soon as it became clear the Matis would not just allow the caravan to travel through their land, and the Fyros were not about to offer them compensations, the Taliari decided the caravan would simply take another route. This ended the need for any further negotiations.

Nevertheless the Matis Nobles, ever distrustful of their ancestral enemies the Fyros, announced a blockade of their border:

Tomorrow the Heretic's Hovel Portal will be blockaded by a small detachment of Matis troops. This is in order to prevent the Akenak from bringing any water shipments through the Verdant Heights following their disrespectful displays towards the people of the Matis Kingdom and their refusal to negotiate a small token of appreciation to the Monarchy.

We are not insensitive to their situation and are more than willing to offer assistance if we were to only get proper recognition and gratitude for that help, but all we have received from the Akenak is disrespect, taunts, and deliberate provocations.

As the Taliari have assured us the main water caravan will be taking a different route, we trust this will not cause too much trouble to our Tryker allies. We are sorry for any inconvenience this may cause to other travellers. Citizens in good standing will of course still be welcome through our border.

-The Chamber of Nobles, in servitude to King Yrkanis.

Shortly thereafter, the Tryker Water Company issued an announcement of the change in plans:

As reported by Bresky Mac'Naroy, 31 packers with 410 available bulk are needed to transport all the prepared barrels. Per the request of the Taliari, the caravan will leave from the Fairhaven stables and then proceed to the non-disclosed pick up point for distribution. To allow proper time for distribution, the caravan should leave Fairhaven no later than 7h Dua, Frutor 2, 1st AC 2551(JY). 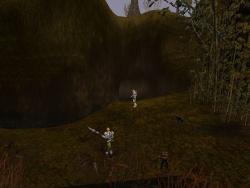 The water caravan was to leave on the first days of Frutor, so for the last days of Harvestor a tension came over the lands as all homins waited and speculated what actions the various governments would take. Some homins declared this already meant war between the Matis and the Fyros, and some Fyros announced their desire to simply run the caravan through the Matis lands by force.

The governments too anxiously watched each other's actions. Would the Matis would make true on their announcement of a blockade? Would the Fyros attempt to run the blockade or would the Tryker indeed lead the caravan through the Prime Roots? It did not help to quell speculations that the pick up point was 'non-disclosed'. Some even rumoured the Matis planned to ambush the caravan in the Prime Roots.

The caravan gathers in Fairhaven.

When Frutor came, a force of mostly Fyros and Tryker gathered in Fairhaven with packers in tow, ready to transport the barrels of water to the desert. In the end though, the Tryker were the ones leading the caravan. Led by Ba'Rory Eoxie and Jorty Eoxie, it headed first to Fount, where the water barrels had been stored, to load the barrels onto their packers. Once loaded the caravan then proceeded through the Bounty Beaches and into the Prime Roots Trench of Trials.

The caravan's escort apparently had little trouble handling any trouble they came across, because the caravan moved up through the Lands of Umbra at amazing speed, emerging from the Prime Roots directly into the Scorched Corridor in the Burning Desert. It was from there only a small bit further to the water distribution point that had been set up in Imperial Dunes. The cargo was unloaded there and made ready to be distributed amongst the thirsty tribes.

No confrontations with Matis ever took place. In fact, because all eyes were on the caravan, most homins were unsure whether there ever was a blockade. The Nobles claim it was set up when the caravan departed and lifted as soon as the caravan arrived, but many homins doubted their claims. Though the whole thing ended without any confrontations, many also felt this whole affair marked an increase in hostility between the governments.

The Fyros received the water they needed to last another cycle before the shortage could become disastrous, though the drought was not over yet. After the caravan had arrived at it's destination, the Tryker Water Company announced it would be handing out rewards to all Water-Carriers who had donated large amounts of water. These rewards turned out to be the first Master's Instruments to be created in the New Lands.

The following cycle, the drought in the Burning Desert would have even more disastrous consequences.

Water Caravan Screenshots - Pictures of the water caravan on the official forums.

Taliari Assembly Notes - Assembly notes for both Taliari meetings during this event.