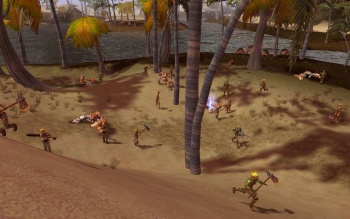 In the second cycle of Jena Year 2551, the terrible drought that had hit the Burning Desert a cycle earlier got worse. The situation in the desert became so dire that the desert tribes blockaded the Fyros towns, and Frahar took over the oases. Various battles took place and travel in the desert became much more dangerous.

The extra water that had previously been delivered to the desert ran out, and the Fyros government had to request a second delivery from the Tryker. Water-Carriers worked long and hard to gather the necessary 510 barrels of water in the lakelands, while the situation in the desert became increasingly hostile as the delivery had to be delayed.

When the water caravan finally departed, it was not able to carry enough water to completely meet the needs of all desert inhabitants. A water shortage remained, and the tribes and Frahar remained at their places. Travel in the desert remained unsafe for months and a civil war loomed.

It was well expected after the events of the last cycle that the drought would not be over so quickly, thus it was planned well in advance that the Akenak and the Taliari would meet again on Medis 11 in the summer of the second cycle. The drought did indeed last on, so at this meeting it was quickly agreed another shipment of water was needed and would be supplied. A call once again went out to all Water-Carriers:

Citizens of the Federation and interested parties! The Akenak have again asked for assistance in acquiring water for their constituents, who are experiencing a major drought. This new request is an even greater undertaking and will require homins who have the Water-Carrier occupation to gather components to prepare the water for transportation. A minimum of 510 small barrels has been stipulated as required by the various people of the Desert.

Bresky Mac'Naroy will periodically collect the components needed to assemble the shipment for transport using the provided conversion chart.

A bonus is given for donations of every 20 barrels.

All components must be turned in by Holeth, Floris 6, 2nd AC 2551(JY) to allow ample time for packaging.

Any homins wishing to assist in the transport (supplying packers or acting as security) are to meet Bresky Mac'Naroy at in Fount. Please plan on bringing your packers early to have enough time to secure the loads. The caravan schedule will be updated.

Which was followed by an official request from the Fyros Akenak:

Hail Homins! The Fyros Akenak desperately require your assistance, The drought in the burning desert continues to keep us deprived of water needed for our tribes. The Kind Tryker Taliars and the Tryker people have agreed to assist us once again in our time of need…However supplying us with the water needed is all they can do. Gracious homins we Akenak call on you to please gather water as you did last time to ensure that the desert is provided with the water we need! This time around the Caravan must consist of 34 packers and 459 barrel of water…This seems an easy task, However We only have two months to obtain this water or the caravan will leave as scheduled with or without the needed water. My Blessings be with you kind homins to be of assistance in our time of need May Ma-duk or Jena guard your soul!

Because there was precious little time, Water-Carriers had to rush to gather as many barrels of water as possible. After the deadline passed, it was unclear whether or not the quota had been met. Apparently it had not been, and this messed up the plans of the water company, as several months passed in which nothing was heard about the caravan's departure date. 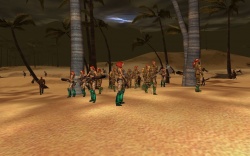 In the fall of that cycle, explorers in the Burning Desert reported that all tribes had sent out expeditions to the nearest water source. Apparently the need for water drove them to secure what they could. Adventurers in the desert, seeing this as a threat to the water supply of the Fyros cities, clashed with these tribe expeditions on occasions. But other than that the tribes did not yet act any more hostile than normally.

There are large numbers of tribesmen at all the springs in the high areas of the desert. We had already seen the Dune Riders and Scorchers in Thesos. There are Barkers and Lawless at Troubled Water in the Sawdust Mines region, Water Breakers and Watchers at Oflovak's Oasis, and Renegades and Frahar Hunters in the area of the Dyron Lake.

Meanwhile the Akenak and the Taliari met again in Fairhaven on Fallenor 12, to work out the details of the agreement for the regular water supply from Aeden Aqueous to the Burning Desert, as well as the compensation the Fyros would pay the Tryker in return. 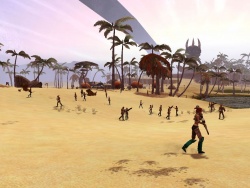 As winter came and still no additional water arrived, the tribes became more desperate and more aggressive. They moved their forces from the oases to just outside the Fyros towns Thesos and Dyron, blockaded the towns and started to attack any travellers that tried to move past them. The Fyros army, reluctant to start a civil war with tribes that were usually their allies, did nothing to stop them. To make things even worse, with the tribes' forces no longer securing the oases, the water there starting attracting thirsty Frahar, who camped outside the lakes and attacked any homins that came too close.

The citizens of the desert quickly became frustrated with this situation and called for action. A new arrangement for relief was made and announced: 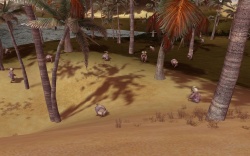 Frahar gather at the Oasis.

The caravan for emergency aide has been arranged for Prima, Germinally 1, 3rd AC 2551(JY) at 6h. All interested parties transporting water should meet Bresky Mac'Naroy in Fount prior to the scheduled departure time to secure the loads on their packers.

Prior to departure Bresky Mac,Naroy will periodically be available to homins with the Water-Carrier occupation to collect the components needed to prepare the water for transportation. A minimum of 510 small barrels has been stipulated as required by the various people of the Desert using the provided conversion chart.

A bonus is given for donations of every 20 barrels.

All components must be turned in by 18h on Quarta, Winderly 28, 3rd AC 2551 to allow ample time for packaging.

Any homins wishing to assist in the transport (supplying packers or acting as security) are to meet Bresky Mac'Naroy at in Fount. Please plan on bringing your packers early to have enough time to secure the loads.

Once again the Water-Carriers set to work on gathering all those barrels of water and handing them in to Bresky Mac'Naroy. And this time the quota of 510 barrels was met on time, so the caravan could finally depart.

The water caravan finally departed in the spring of the third Atysian cycle. As this was the second caravan of it's kind and homins already had the experience of the first one, it proceeded rather smoothly. As last time, the homins gathered in Fairhaven with packers in tow, where they met Ba'Rory Eoxie and Jorty Eoxie who led the caravan to Fount to load the water barrels onto the packers. At the loading point it became clear they didn't have enough packers available to bring all 510 barrels of water with them, so they decided to simply bring as much as they could.

Once the caravan was loaded with water, they proceeded again into the Trench of Trials. The trip to the desert through the Prime Roots was long, but mostly uneventful. The caravan suffered a break from routine only after it reached the Burning Desert, where it was ambushed by parties of thirsty Frahar. These were no real threat to the caravan's escort however, and the caravan safely made it to the water distribution point that had been set up in Imperial Dunes, where the cargo was unloaded. 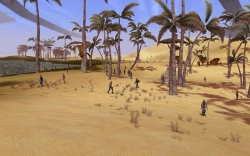 Tribes as far as the eye can see outside Dyron.

Once again, after the caravan had arrived at it's destination, the Tryker Water Company handed out Master's Instruments as rewards to all Water-Carriers who had donated large amounts of water to the cause.

Unfortunately, not enough packers had been available to carry all 510 barrels of water. So although the water shortage in the desert was diminished, it was not relieved entirely. The tribes continued to blockade the Fyros towns in protest, and the Frahar continued to camp at the oasis. The citizens of the desert, feeling they had done all they could to relieve the drought, got sick of these tribes only making things worse. Some tried to drive them out by force, but though a lot blood was shed, the tribes refused to move.

The Fyros began increasingly calling for full-scale military action, but the Senate refused to comply, which further fuelled the discontent amongst the citizens of the Burning Desert. One Akenak was said to have resigned from her position over the Senate's refusal to act. It seemed only a matter of time before the desert would erupt into war one way or the other.

And indeed as the year went on, the desert plunged further and further into chaos.

The Eye of the Tyrancha issues about this event - Issue 19 (second part only), Issue 20 and Issue 21.