This is a type of special consumables (also called XP catalyzer or just cats) that help a free to play or unsubscribed player to double the amount of gained experience. The rate of use is 1 catalyzer for each multiple of 100xp gained; lower amounts of xp will not be multiplied. For example, if a character that earns 1450 experience from an action while a catalyzer is activated, the real amount of experiences gained will be 2850 (2 x 1400 + 50) and it will consume 14 pieces from the stack (14 for each 100 xp).

Note: Subscribed characters have permanent catalyzers, active at all times, and do not need to care about it while the subscription is valid.

There exist various qualities of experience catalyzers you can find in the game. Catalyzers only affect experinces gained with a skill of lower level than the actual catalyzer quality is. This means that a catalyzer of quality 100 will double experiences only for for skills that are at level 99 or lower. 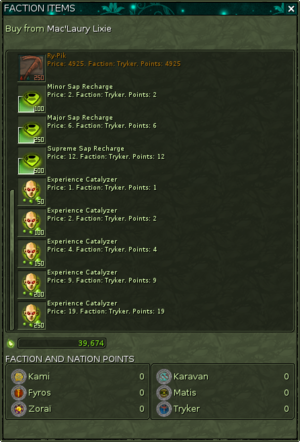 Note: Limit for free to play and unsubscribed characters is at level 125. Therefore, catalyzers of quality 150, 200 and 250 all do the same thing.

How to get catalyzers

There are several ways how to get experience catalyzers:

All subscribed accounts have permanent catalyzers activated by default at all times. Free to play and unsubscribed characters need to activate them manually before they take effect, by right-clicking on a stack in the inventory. Logging off and on will also turn off catalyzer usage, requiring activation again. When a catalyzer is activated, you see its icon in the Bonus/Malus window on your screen and the number under this icon says how many pieces left until the catalyser is consumed. Permanent catalyzers of a subscribed character are never consumed, so the count will always stay at "x999".

Note: Catalyzer takes effect only on experiences gained with skill of level lower than the catalyzer quality.

Retrieved from "https://en.wiki.ryzom.com/w/index.php?title=Experience_Catalyzer&oldid=43528"
Categories:
Hidden category:
This page was last edited on 29 March 2021, at 20:17.