Elyps (or sometimes elypses) are a role-play term to call your character involvement with other homins. You rise your social credit (gain Elyps) towards others and you can use that reputation (spend Elyps) to get various services from some homins (mostly merchant NPC). It is a form of currency, a role-play alternative to PvP and nation/faction points. It was called Involvement in the past. 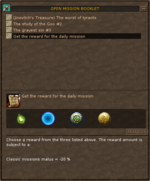 To see how high your Elyps is, see a merchant window or open your character Identity profile (press P) and switch to Advanced stats tab. Click the refresh icon at bottom right to update. There exists several ways how you can rise your "social credit", gain Elyps:

What can you buy? 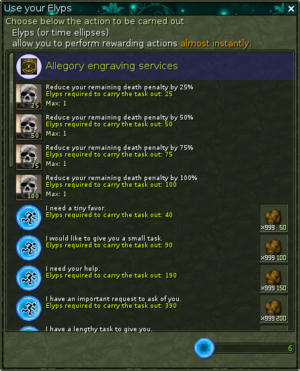 Some services offered for Elyps

Each NPC that offers any services payable with this currency is marked with Elyps icons by his/her name. There are several services how you can use your reputation, pay with Elyps.

There are several services related to your animals you can use by spending Elyps. These services are available by a Stable boy in each capital city or Marauder camp and will register your mount, packer or zig (pet) by the National Registry (role-play name for custom names database).

Elyps are part of the Storyline project and being actively developed.