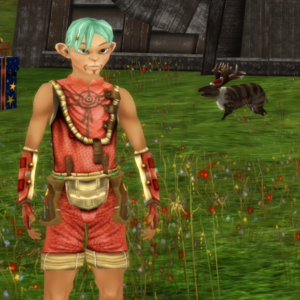 “It's a story that bears some sad passages, but hold your tears. I promise you it ends well.”
Lutrykin looks at the assembly, lingering on each face as he begins.

Once upon a time there was an old fyros toolmaker. All his life Odrafyrkos had been making practical tools, but all he had ever dreamed of was creating beautiful things. And now he was old and bitter. He was even starting to have trouble making his tools. So he looked for an apprentice, but nobody wanted to work with him. One day, a poor homin came to him and offered to take his youngest son as an apprentice with no other compensation than to provide him with food and lodging.
And that's how Piros entered Odrafyrkos' life.
The toolmaker showed his apprentice around the workshop, presenting and explaining everything the boy would have to do. In the end, he stopped in front of a closed door.
“You must never open that door. What's there behind doesn't concern you. Do you understand?” he said.
Although dying of curiosity, Piros nodded his head and began his life as an apprentice.
At first Odrafyrkos was behind him all the time, but Piros was quick and learning fast. Soon his boss gave him more and more tasks. :He even began to left the workshop for a few minutes and then for longer and longer moments.
At first, Piros didn't understand where he could pass those moments, but then he realized that Odrafyrkos locked himself in the forbidden room. Piros would sometimes stop at the door and try to spy but he couldn't hear anything and his curiosity only grew.
One day Odrypakos said to his young apprentice: “The master toolmaker needs me. I have to go away for several hours. Go on with your work, I'll check everything when I get back!
— All will be done, Odrafyrkos!”
Piros was curious despite everything. And his master was gone.

Lutrykin looks at the assembly: Guess what he did?
Krill: He went to drink a shooki at the bar… / Lylanea: Well, I guess he… / Muetze:…opened the forbidden door. / Krinseus laughs. / Kyriann: Go for it Piros!! / Wixarika is in fits of laughter. / Chipset: Oooh! nooo is he…?
Lutrykin smiles: Oh yes. He resisted temptation as best he could.

Piros continued his work but he thought that offered the perfect opportunity, he would never find a better chance to see what was in that closed room. After a few minutes of restraint, he couldn't wait any longer and moved noiselessly towards the door. He was at last about to know!
“I just take a look and I'll get back to work soon.” he said to himself.
He took a deep breath and in the same momentum, opened the door, sneaked into the room, closed the door, and leaned against it.

Lutrykin pauses with a smile.

And there! Oh stupor! The room glittered with lights! Everywhere, on every wall, on the ceiling, the slightest inch was adorned with stars that shone with a supernatural light. Subjugated, he moved to the center of the room to better enjoy the show. He sat down and lost the notion of time in contemplating so much beauty.
He only regained his mind when the door opened violently.
VHAM!
Odrafyrkos was furious. “What are you doing here? I told you not to open that door! All this is only for me!
—But, Odrafyrkos, all this is too beautiful! It has to be shared with others!
— Get out of there!”
Piros left the room dragging his feet.
Odrafyrkos closed the door behind them.
“But who created all these beauties? asked Piros.
— Do you think I wouldn't be able? I am the one who did, of course!
— Oh, Odrafyrkos, so please teach me!”

Lutrykin lowers his voice: Yes, it's a bit sad. But it will be okay!

Piros held back his tears only with great difficulty.
“How can I trust you? You betrayed me! Now that you've seen them, you'll want them for yourself. No! You must go!”
Piros implored: “Please! Think about it! I can help you to create even more!”
Frowned eyebrows, Odrafyrkos looked at the apprentice. Since the kid was here, indeed, things had changed. All you had to do was to see his current stars becoming more and more beautiful.
“Tonight you will sleep with your family and tomorrow, first thing, you will come back to see me. I will give you my answer. Now go!”
All night long, Odrafyrkos searched for the right solution.
He felt like the fervent patriot he once had been, seeking Truth and Honor. And the Truth was that the stars were as much his own as those of that scoundrel. But Piros had disobeyed and flouted both Honor and Discipline. He had to be tested.
But the apprentice would not give up. By morning, he was at dawn in front of the door.
“I'm giving you one last chance to make up for it. You'll have to be very attentive and disciplined. If you pass the trials, you will learn how to create stars. Do you feel up to it? said the toolmaker.
— Yes, Master Odrafyrkos. I will obey you in everything!
— So to start, you're going to have to tidy up the whole workshop. Everything has to be gleaming. You can't create beauty in a mess.”
And Odrafyrkos added: “Meanwhile, I must go back to the master toolmaker. Atysmas is approaching and it seems that he can no longer do without me.”
Piros enthusiastically began to tidy up, but when reaching a corner of the workshop, he found a nest of dune worms in a pile of sawdust that seemed to have taken up residence there. Indecisive, he stood there for a while with the broom in suspense but finally decided to hide the nest behind a crate, hoping Odrafyrkos would not find it.
But Odrafyrkos was observant. When he returned, the workshop was gleaming. He was already congratulating Piros when his eyes were drawn to the crate in the corner.
He asked: “Um… but why didn't you put that crate away?”
The boy wiggled on the spot, blushing under the gaze of his master.
“Talen, Piros, the Truth!
— It's to hide a nest of dune worms. They do nothing wrong. Can't we give them a small place in the workshop? Please!”
Piros shivered and waited for Odrafyrkos' answer.

Lutrykin asks the audience: How do you think the toolmaker should react?
Eeri: He takes the dune worms, and fries them, it must be crispy! / Kyriann laughs. / Wixarika bursts out laughing. / Lylanea: Compassion for the weak is a virtue. / Krill would like to hear the end of the story, not tell it. / "Haokan:" Propose one more test to him? / Krinseus wonders if the worms are thirsty.
Lutrykin laughs: No, that's not what he did! Here is his answer:

“I said: clean up the workshop! Go put this crate in its proper place! And you'll have to be careful not to step on the worms passing between your legs!”
Piros smiled and rushed off to put the crate right in place.
“"Now we can start your apprenticeship. Go quickly get the tools and materials that are in the forbidden room. But be careful! Don't look at the stars, concentrate and do what I tell you. You must keep your goal in mind and come back immediately.”
The departure was dazzling and Piros pushed the door, full of determination. As he entered the room, he concentrated on his feet and managed to advance into the room until he picked up the tools and materials. He was returning to the door when an even brighter glow caught his attention. Instead of looking at his feet, his gaze wandered to the stars…
And CRASH!
Everything he had in his hands ended up on the floor! The noise, however deafening, could not bring him out of the trance and Odrafyrkos had to shake him to make him come to his senses.
“Orak, Piros, the Discipline! Pick up the tools and don't look at the stars!” the toolmaker insisted.
All the rest of the day, they cut, sanded, and forged stars together. They were able to make many stars. But something was missing.

Lutrykin asks the listeners: "Can you guess what was missing?
Chancy: The light. / Kyriann: The light! / Krill: Beer! / Lyne the Great's Gold: A tree? / Eeri: The shooki!!! / Kyriann is laughing. / Chipset: Worms! / Lylanea smiles...
Lutrykin says: Exactly! The light!

These stars were beautiful, but they didn't shine.
Then Odrafyrkos gave his last lesson to the apprentice: “Shaping is not enough. For each of the stars, you will have to give a part of yourself for the magic to ignite them.”
Odrafyrkos took a star in his hand, seemed to sink in his own self for a moment and suddenly the star began to twinkle.
He said: “Let the sap flow from you, and see how the living wood absorbs it! Now it's your turn!”
Piros was much bothered. He didn't understand what he had to do. He took in turn a star in his hands, but it was no use.
I can't do it, Odrafyrkos! What is to be done?
— “That I can't explain to you. The Will has to come from you. Your Honor will guide you. Look, the night has come. I am going to leave you.” replied his master.
Left alone, Piros struggled to find a way to push his sap into the stars, but to no avail. In rage, he swept the workbench sending the stars to the ground and ran to pick them up at once, crying in rage and despair. Recovering a star, he sat down near the nest of dune worms and told them, distraught, of his misfortunes. Talking did him good, and it was more determined than ever that he stood up and went back to the workshop.
And that moment, something unexpected happened that would help him: by chance or deliberate will, one of the worms rushed into his legs and cause him to fall.
“OUCH!!” Piros said as he got up. The star he was clutching in his hand had planted in his palm. Through his fingers, he could see the glow that filled it. That's when he understood. He opened his hand, dazzled and stunned but so proud.
The star was shining brightly! He had succeeded!
In the morning, when Odrafyrkos arrived, he found the workshop filled with bright stars while Piros was sleeping in a ball near the nest of dune worms. He smiled, happy and proud of his apprentice and, for the first time, he took the stars and set off across the city to hang them on all the walls and trees around.

-–—o§O§o—–-
And since that time, a star has glittered atop Atysmas trees, reminding us that beauty comes from the heart.

Tale distilled by the Lutrykin Storyteller, during the Tales of Atysmas 2611 (OOC : Christmas 2020) Vigil.

Retrieved from "https://en.wiki.ryzom.com/w/index.php?title=Lighting_the_Stars&oldid=42065"
Categories:
Hidden category:
This page was last edited on 3 February 2021, at 19:08.