Exploring the Lands of Umbra led me to the north,
to Windy Gate. Not that the Elusive Forest is uninteresting
with its spectacular felled tree, but I just had not found the
kind of thing I was looking for: Remains from a forgotten past...

There were two such sites in Windy Gate close to one another
in the area called "the Ruins of Leron". I found no indication of
what the Fyros sounding name referred, but all was not lost.
Objectivity is sometimes altered if one has preconceptions. 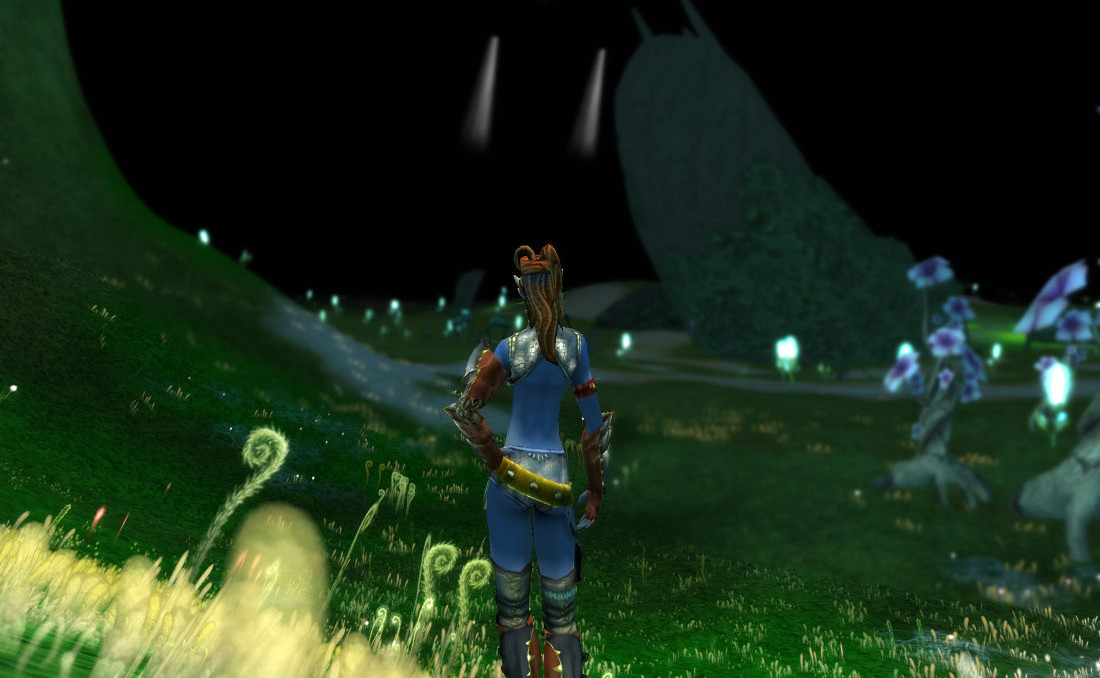 The first edifice was an imposing building, a huge block stuck in the soil,
its apex gently tapering in a rounded tip, decorated with small antennas.
Were these the remains of a large kitin? *smiles* I moved around to the East,
hoping my thoughts would alter from another viewpoint, but nothing came
to mind as I circled its massive base. 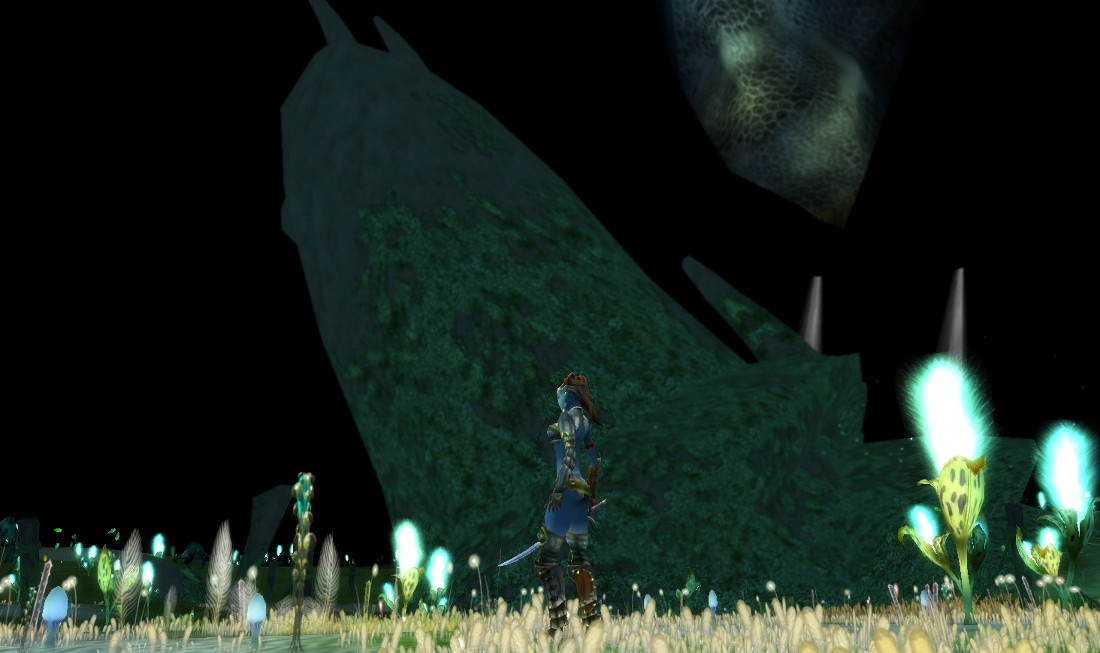 I continued to walk around the monument and noticed loose pieces here and there,
showing that the structure had suffered damage. I wondered if its demise had
to do with the "dolhwint" tests? Had it been built on-site or did it fall through from
the ceiling above?

The second site was even more peculiar. It looked like three huge carcasses
of massive animals. Size could also be determined by giant skulls found as there are
on the bark. Ah! But the place was infested by a group of Trykettes. I discreetly went
my way and they left me alone.

Observing the remains, I thought, were these the remains of once living creatures?
Or artificial constructs? Rib bones normally taper at their tips, but here, the section
was constant from one end to another and was squared off at the end. Similarly that
which held, instead of vertebra; although the general arrangement of the column was
realistic, was actually a cylinder flanked by two discs - a bit crude for a bone from a
creature of Ma-duk. 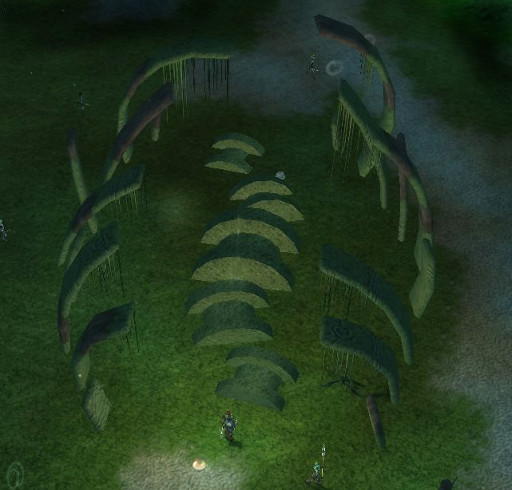 In the midst of the three carcasses was another, smaller, structure.
Here I finally find that there is no doubt this is the work of homin hands! 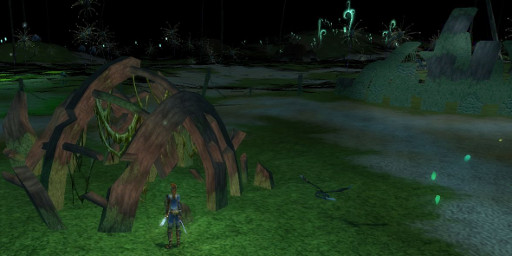 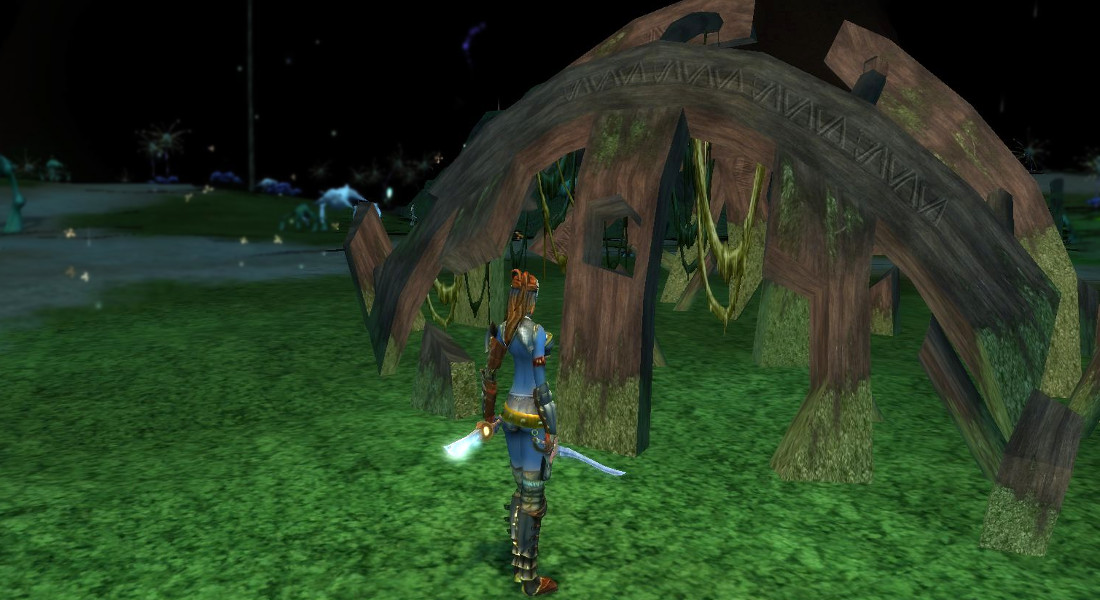 A hemisphere of wooden beams. One of the beams was even decorated with
a frieze of triangles, characteristic symbols of Fyros art, which are used on
their buildings and weapons. 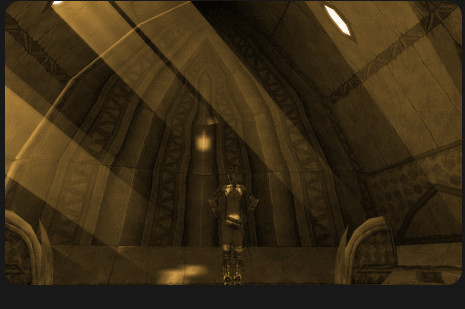 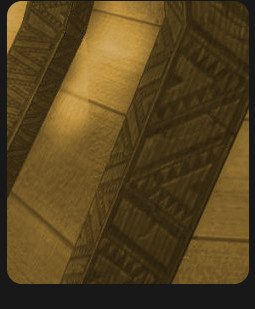 The beams attached together into some sort of structure. Was this a hut?
Or a construction useful to harvesters?

I returned to one of the carcasses and realized they too were covered in symbols.
Ripples, sun.. rather Tryker in nature! Oy!

Had I seen these symbols before? And where?
I tried in vain to remember. I needed a more powerful method to access
my memories and recalled the "zhong-yum li'sen* technique" of Zoraï
meditation to delve into my unconscious memory. I had had some fundamental
training with my friends from the old Wa-kwai monastery. The concern I had
was that my basic knowledge, and my lack of control, could resurrect a jumble
of memories that would overwhelm my mind. This could turn into a nightmare!

Too frustrated by my lack of recall, I tried anyway. I fixed my sight on the
symbols I wished to immerse myself in. Then, closing my eyes, I cleared
my mind. Unable to act or speak, a spasm threw my head back while my
eyes danced faster than the flapping wings of a kipesta. A flood of images
poured into my head, rushed into my nose, my throat... I was choking!
I.... Oh no!... 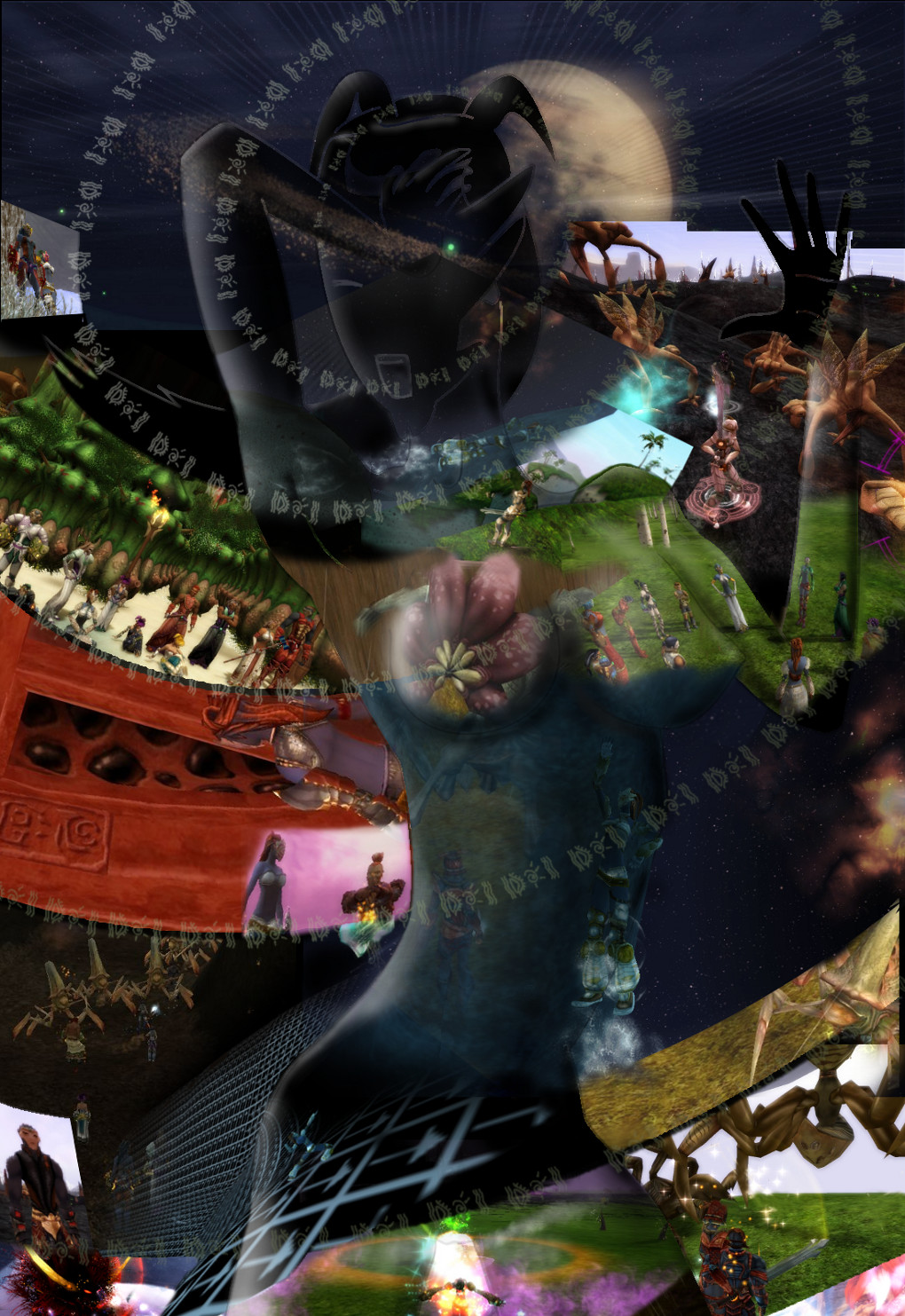 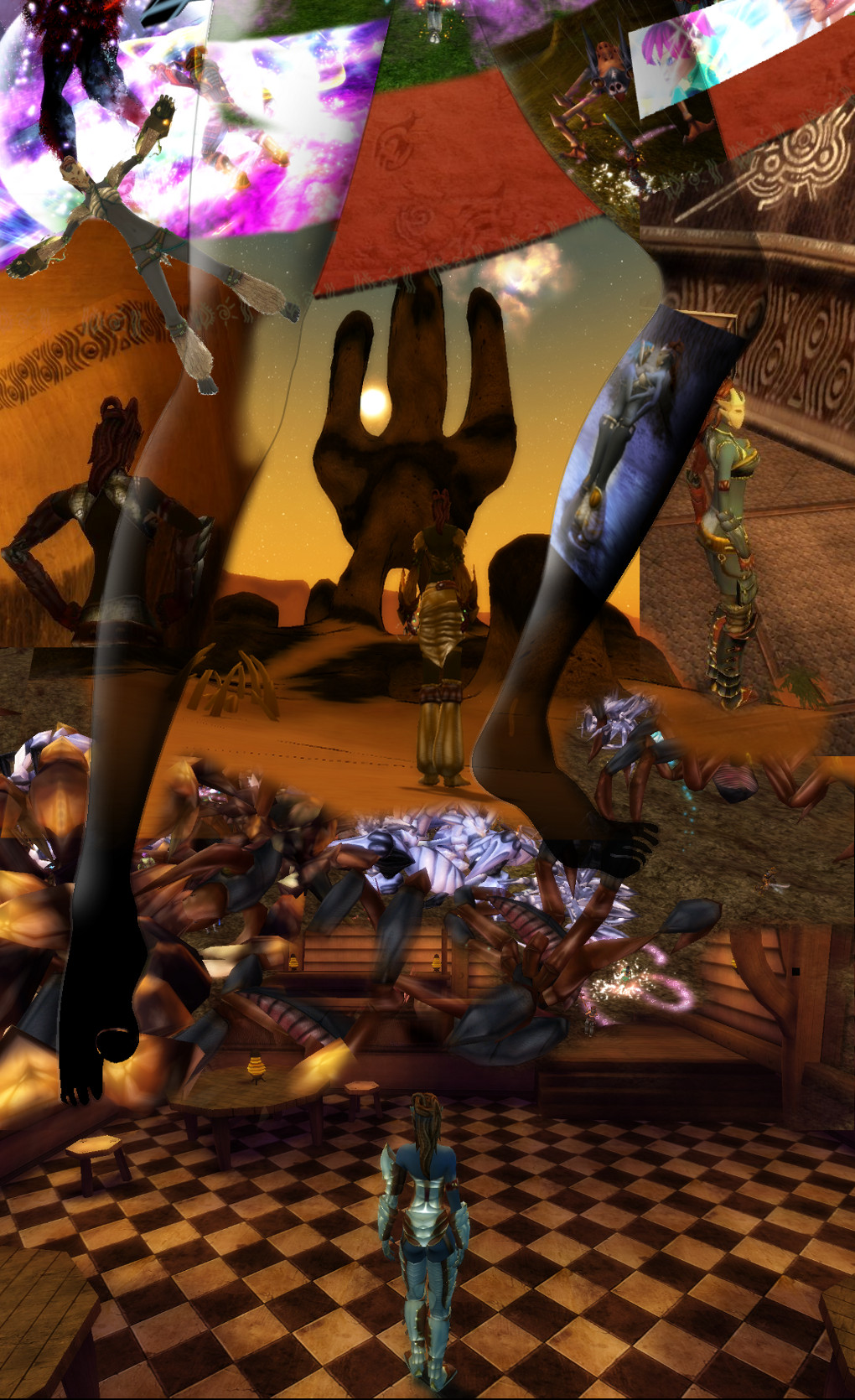 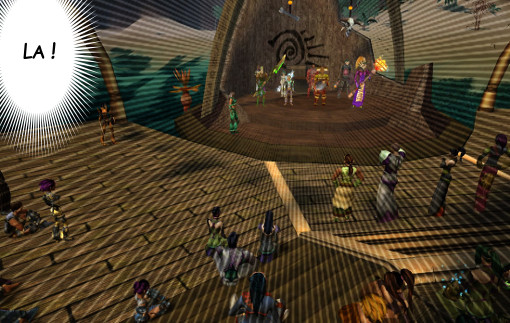 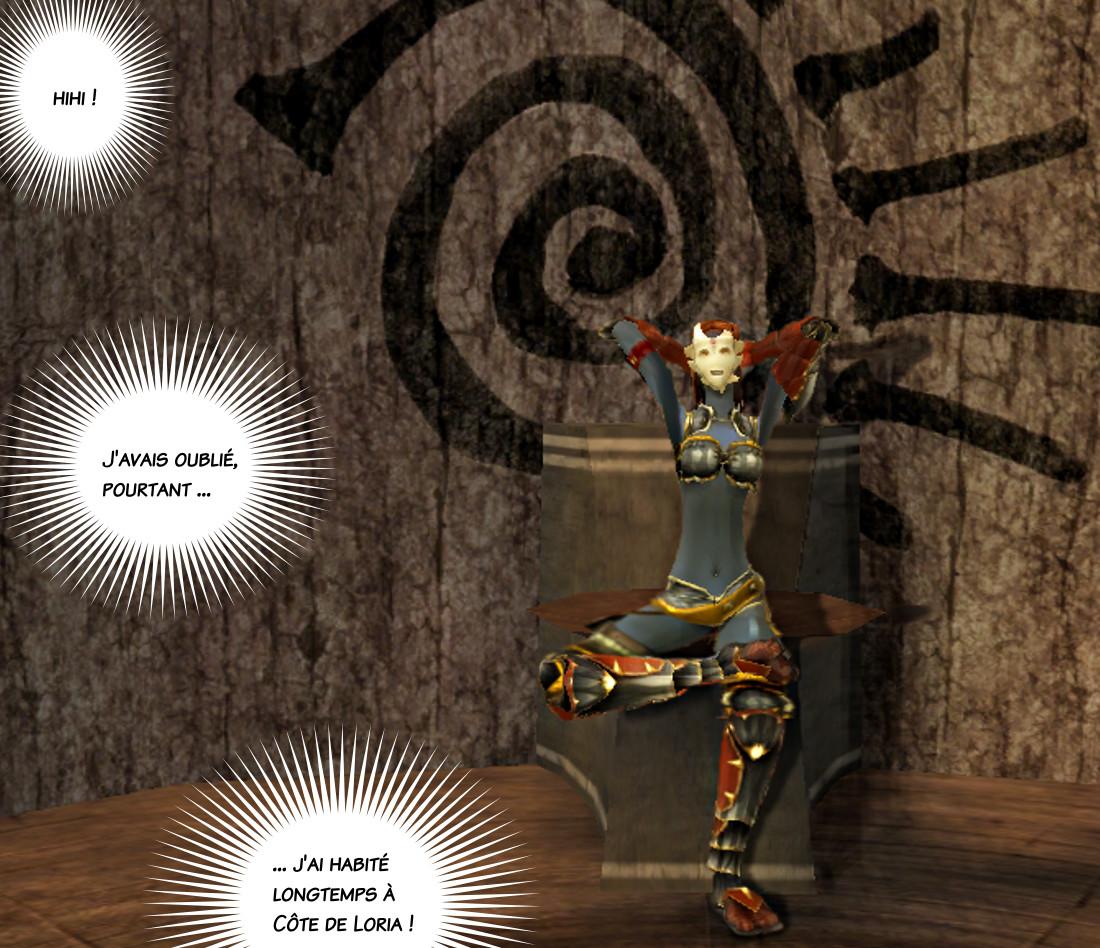 Slumped to the sawdust, I slowly recovered from the emotional
discharge and reflected on the found symbol.

It must be very old, almost primitive. Indeed, a symbol behind a throne.

Still observing the carcass, I noticed that each "bone" was partially
covered with a thick greenish foam. I also detected that it was only
the symbols in the "green," never the raw material. As if... they were
not original, but carved later! I tried to scratch a bit of foam with the
tip of my dagger to test this idea. 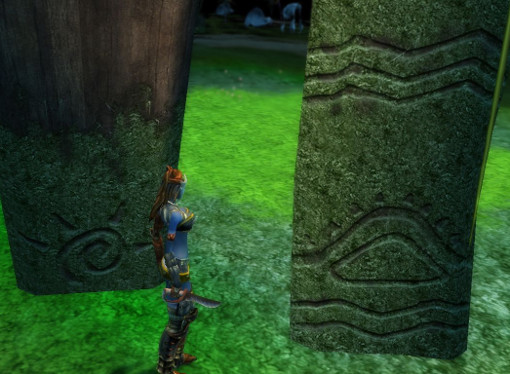 What if... I turned my eye to the group of Trykette bandits who
inhabited the place... if it was they who added the symbols?

I tried to engage in dialogue, but to no avail... usually I have a
good rapport with Trykers! 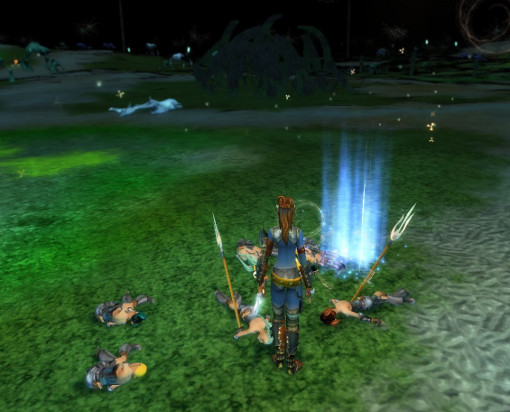 For one last time I laid my eyes on the carcasses and thought,
"Perhaps it was the bandits that constructed this macabre stage!
Thus replacing the remains of ancient ruins, which do not at all look like this...

More questions than discoveries were made in this place for Lakshmee.
Yet, she had indeed "seen" something important. A discovery which will
leave her speechless... Still she will need to first visit and revisit other
places to realize...