A teenage albino matis girl of about 16 years[1]. Since her resurrection, when she was announced dead, and said to have been buried, she has not grown up, although it can be assumed that she should be about 22 years old.
She is frail, weak and fragile, and seems unable to hold a weapon, but submits to training within the Libres Frontaliers[2] inherited from her late mother's courses and training, and now fights with the huge two-handed Alanowë family sword.
What she does not possess in strength, she has in stamina and courage, despite her sickly appearance, and she has already survived fatal wounds and injuries, always recovering.
She has two very distinctive wounds on her body: A scar on her flank, the size of a hand, a spear having pierced her side from side to side, and another star-shaped mark, a perfect scar from a stab wound in the heart.

One thing that is always surprising is the ability of objects invested with sap to vibrate and emit a kind of crystalline song when it is very close, or touches them. This never lasts more than a moment, but is systematic.

Following her second memory loss at age 14, she was re-educated as a Matis by Liandra, her adoptive mother, and Florimelle, a moderate Jena priestess, but was formerly a very young teenager steeped in Zorai culture. When her memory returned in a fragmented way, she retained both upbringings and both cultures, although she had to abandon her attraction to the Zorai and the Witherings, as they considered her new upbringing and her faith in Jena to be treacherous.

Her primary character trait is her pacifism, which borders on a phobia of violence. She has never raised a hand against a human being, and is incapable, even in anger, of attacking or insulting someone. Her pacifism has played tricks on her, her hominism making her save her worst enemies or making her feel sorry for the last murderer. However, since her mother's death, she seems to be forcing herself to learn to fight, and wield the family's living greatsword. Like all Atys, she is preparing for the coming war.

Her second trait is a fragile and outspoken personality, devoid of the devious nature of the matis. She expresses her emotions, and cannot hide them, has never lied or almost never lied in her life, and is very unconvinced of the idea of cheating or tricking someone, even if she has resorted to these extremes to protect herself. Always speaking her mind, she easily attracts either great sympathy or great rage from her interlocutors, despite her propensity to always try to favour peaceful and calm relationships.

And her final trait is that she hides beneath great efforts to be cheerful an immense despair. She has lost her loved ones twice, her natural family, then her Zorai family, then her mother, and lives in fear of a destiny that no one knows if it is a lie or reality. She therefore fights against her suffering, against a desire to end it all, and tries as best she can to live her interrupted life in a world where war is the only order of the day. 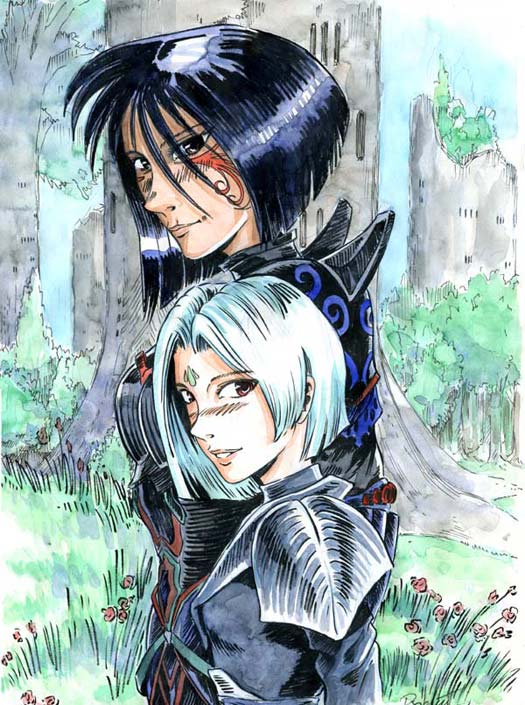 Nemesis: The End of the Masteress of the Blades 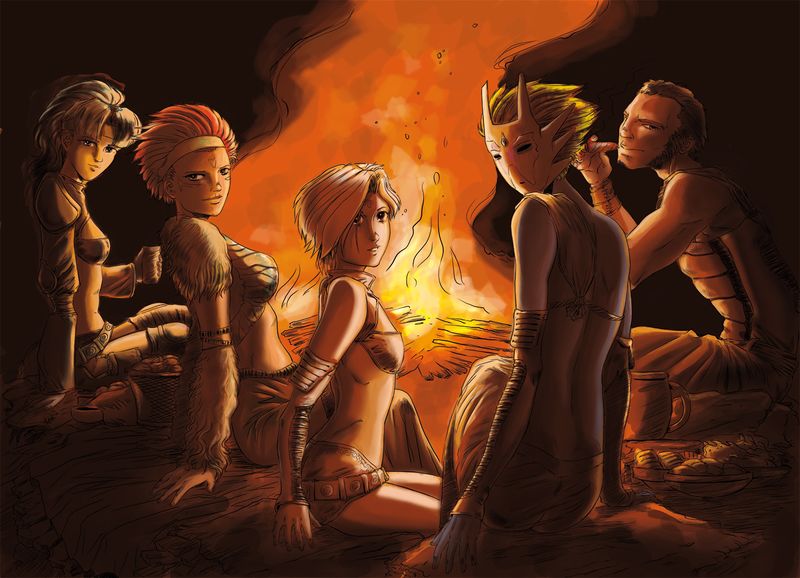 Left to right : Saerra, Vanila, Psychée , Jadzia and Acheran with his BIG cigar as always. [3]