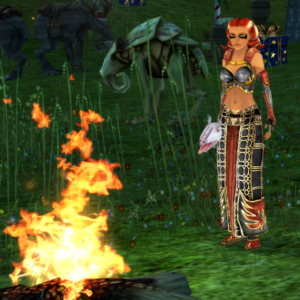 When Atysmas arrives, the Fyros mothers, to dispel their children's fears, tell around a solemn blaze the story of the terrible Great Dragon named fyrak. Under the twinkling stars of the desert, the little homins listen, fascinated, their eyes sparkling and full of joy. Later, when they grow up, some of these mothers, especially the most fervent and warlike ones, will tell them about the "Book of the Great Dragon" which is in the great Imperial Library. But that will be another story, so let's go on...

Thus, with that soft and comforting voice that characterizes a mother's love, they are recounting to their tiny children:

“Once upon a time in the dark lands of the Prime Roots, lived a great dragon, the most terrible that ever existed, known as fyrak!

His magical powers allowed the beast to breathe fire, move quickly like the wind and be as light as a feather!

And because he was a very, very nasty dragon, he was the only one able to throw not only flames of fire, but also powerful thunderbolts from his giant throat. The terrible fyrak attacked tribes and cities just for pleasure, just to hear the screams of despair of the homins during his terrible appearances. But its real enjoyment was to see the Fyros send their bravest and most fearless warriors in attempts to finish him off, as he cheered himself up by throwing incessant rains of flames on their armor or tiny flashes of lightning that burned and made all the hair of the valiant warriors stand up.

Fallen into the sawdust of the Burning Desert, in pain, tired and burned, the warriors left to their fate had to take the long way home with that despairing feeling of defeat that touched their great sense of honor.

Only young Kriros, famous since childhood for his constant nonsense, had a strange sympathy for the dragon. Something inside him told him that no being on this planet could be so cruel, and that the dragon could learn to behave properly. So, when he set out to search for fyrak, he took neither his shield nor his armor and left completely unarmed, determined to find out what drove the dragon to act this way. As soon as he saw the young Kriros appear, the dragon attacked using his whole repertoire of tricks and torments. Kriros, finding the tricks with flames truly unique, even amusing, dared to enjoy these moments with the dragon. When the young Fyros finally crashed into the sawdust of a dune, he got up immediately, very sore but smiling, and cried out: “More! More!”

Fyrak was surprised, but it seems like he had been waiting such praise for cycles. He began to rehearse his tricks of flames and sparks, without hurting the young Fyros, who enjoyed every dragon show.

Fyrak felt so proud to be admired, that he began to show special attention and delicacy to his fellow player.

Finally, Kriros got to know the Great Dragon, only to realize that although he was several thousand cycles old, he was just a young dragon, a huge child with a desire to do stupid things and have fun. With the help of the children of the desert, they both managed to make fyrak's life so happy that the dragon never had to hurt anyone again to have fun. And to pay for his entertainment, he offered his rain of fire, shadow and lightning to all who needed it.„

-–—o§O§o—–-
But beware my dear friends, this is just a simple tale for children!

Retrieved from "https://en.wiki.ryzom.com/w/index.php?title=The_Truth_About_fyrak&oldid=42051"
Categories:
Hidden category:
This page was last edited on 2 February 2021, at 03:13.