Fairhaven Little Ones Market is an event, organised by the "Le Marché des Petits" collective, which takes place every Jena year, during the 3rd CA, on Fairhaven beach, northeast of the main entrance.

To announce on forum

Transcript of the tutorial given by Naveruss on January 4, 2020 (during the Market in Fair Haven). Melee Weapons. How to chose yours?

The lesson on weapons, by Neveruss

oren pyr! I’ll talk about weapon and explain how it works.

Ideally, the weapon should be of the highest possible level in relation to what you can carry.

Note: The maximum level you can carry is equal to your strength+10. Similarly, your maximum strength can reach your highest level in fighting+15. 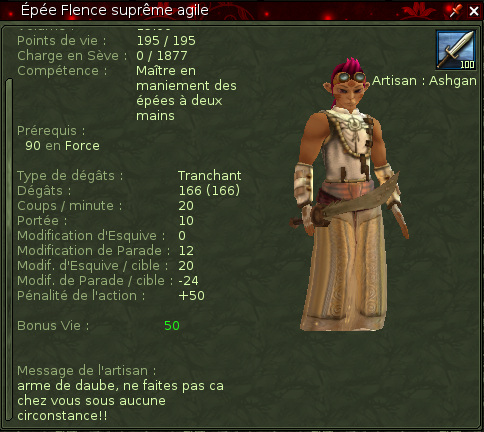 A suprême sword, but bad quality 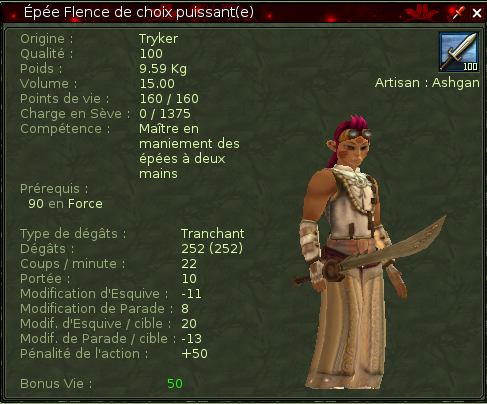 Characteristics to be checked

Now we'll look at the most important features of the weapon.

First of all, you should know that a weapon can be used to hit both mobs (PvE) and homins (PvP), but for the moment we're only interested in mobs.

Against animals, the most important thing will be to do as much damage as possible, taking into account the damage per hit and the number of hits per minute. It is important to know that the damage varies from one weapon to another, maces and axes being the most violent, then come swords and spears. Then, the bonuses of parry and dodge improve your defense, they are moderately important, especially if you are in team with a healer. Likewise, the opposing parry and dodge modifiers are of less importance against beasts, as they usually combine with a weak parry or dodge. However, against homins, these latter characteristics gain in importance, but I won't elaborate on this.

To sum up, you need to favour your weapon's damage per minute first, then all the dodge and parry modifiers after that.

One- or two-handed weapons?

Now we're going to talk about the differences between one-handed and two-handed weapons.

Two-handed weapons do more damage per minute and offer better parry bonuses for you and against your opponent. It can be interesting, when starting out, to start by practicing using a good big two-handed weapon, such as an axe or mace.

A one-handed weapon will be less offensive but will allow you to use a shield or a buckler to improve your defense (or possibly a dagger in the case of the sword). One-handed weapons also offer better dodge modifiers.

What kind of damage?

Slashing weapons can cause hemorrhaging, and thus damage bonuses, and most animals are vulnerable to slash.

Blunt weapons are used to slow down opponents' attacks, and thus limit the damage received. However, fewer animals are susceptible to them.

Piercing weapons can override your opponent's protection. Therefore, despite their lower damage, they are formidable against heavily protected enemies.

Note: Pikes and spears are primarily used for PvP or against certain resistant mobs such as vorax or kipucka. So it's not a priority to master them at the beginning.

What in the left hand?

One last point that we are going to address, when you have a weapon in one hand, what should you choose between a shield, a buckler or a dagger for the left hand?

If you want to maximize your parry, take a shield.

Conversely, if you want to maximize your dodge, take a rondache, or a dagger if you already have a sword or dagger in the other hand.

What to look for in the system information?

Either you are told that you have not hit your target, in which case you do not do any damage, or you hit, in which case, the net damage inflicted is indicated, and in brackets, the raw damage before subtracting the reduction to damage due to the enemy's resistance. You will also find your opponent's parry or dodge information allowing you to adapt your weapon for one- or two-handed weapons.