The Theocracy of the Witherings is organized in circles, in the center of which is Ma-Duk, the Great Creator. Thus, the higher the circle a figure belongs to brings him closer to Ma-Duk and the higher the elevation. However, it should be understood that this does not mean “hierarchy” as it has developed in the Fyros Empire or the Kingdom of the Verdant Heights. The relation between Zoraï in different circle elevations is more similar to the relationship between mentor and disciple with, of course, all the respect that goes with it.

It is therefore a ladder of elliptical concentration, meaning that within a “circle” areas of competence are not necessarily the same (i.e. Season understands the change of Atys; Sorrow understands the suffering. Both are capable of understanding the change and the suffering of Atys, but each has its “specialty”). This level of concentration is centered on Ma-Duk, the Supreme Kami, but it should not be confused with the cult of Ma-Duk (Company of the Eternal Tree, Adepts, Bonzes, etc.), therefore the Zoraï Theocracy is a bit different compared to the “official” worship.

Elected by the Council of Sages for life. Must be Zoraï with Zoraï citizenship and a faithful Kami worshiper. Highest authority of the Zoraï people, they are best able to understand and convey the wishes of the Kami.

Spiritual
He is the hope of the Zoraï Initiates and is the voice of the Kami. He is the model for all Zoraï and his enlightened role is to interpret the will of the Kami, and occasionally that of Ma-Duk when it is aimed directly at him, and then convey it to the people of Atys.

Diplomacy
Representative of the Zoraï, he maintains relations with other countries to promote the word of the Kami and protect the interests of the Witherings.

Guild of Cho
He is the authority figure of the Witherings and oversees the Guild of Cho. He may have, in some cases, judicial power.

The Sages are Zoraï having a special connection with Atys and understand Atys better in general. They are closer to Ma-Duk than all other hominis.

They are responsible for governing the Witherings and all internal affairs in agreement with the direction decided by the Grand Sage. Their wisdom and knowledge are very great. They sometimes have an advisory role to the Awakened and give direction to follow in those actions that they bring it up if necessary.

There are four political functions that can be held by the Awakened:

Becoming a Representative of a Circle

The Intendants of Cities of Intuition

The Council of Sages

The Council of Sages is an exceptional meeting of the Sages and the Awakened, which meets for the most important issues of the Witherings.

Thus, with the exception of the Kami, the Council of Sages would be the only institution that is placed above the Grand Sage and acting after his death or appointing a new one when he is no longer in a fit state.

Hierarchical structure of the Theocracy 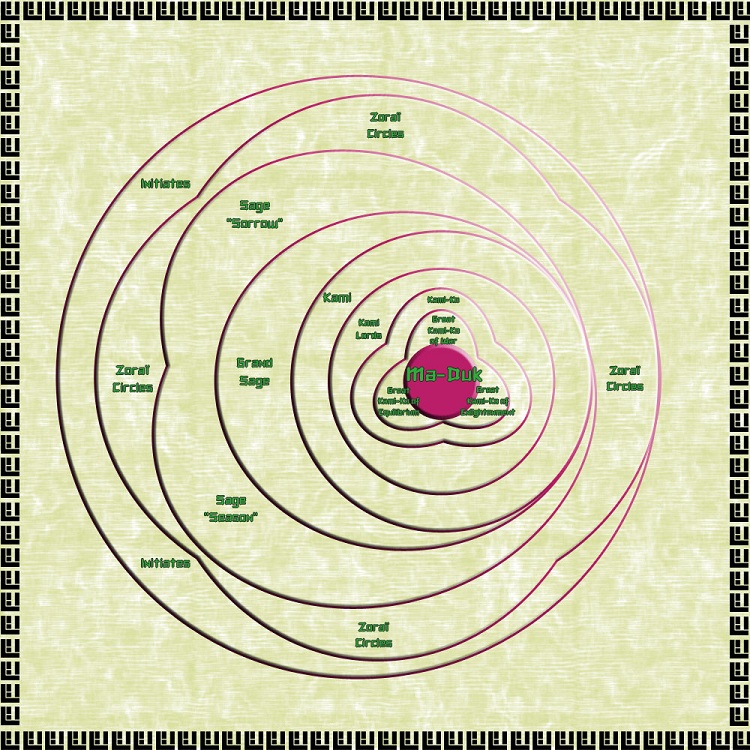 Constitution of the Circles of Zoraï Wisdom

1. At the Center of Circles is Ma-Duk, as he is at the heart of Atys. 2. The Inner Circles are the Grand Kami-Ko, the Kami-Ko and the Kami. They emanate from Ma-Duk and are part of him. 3. At the heart of the Homin Circles is the Grand Sage. He is the hope of Ma-Duk, and the highest homin. 4. All go in the respect and protection of Atys. 5. Zoraï people, single and multiple, are the only ones who can decide on their actions. Each Zoraï is free to his opinions and his actions. 6. The Council of Sages, known for its wisdom, is the only one able to speak for all.

7. The sacred mission of Zoraï is to fight against the Goo, against which the Kami can do nothing. To do this, Zoraï live in the Jungles of Atys, where the problem is most severe. 8. As Zoraï, the Kami also serve Ma-Duk. The wise listen to the voice of the Kami because it will lead to the path of enlightenment.

Service to the Zoraï people

9. Circles are intended to enable Zoraï to express themselves and share their resources for the common good. They will gather in assembly in order to communicate and transmit knowledge.

9.1. Each Zoraï Initiate can speak at meetings and all are equal.
9.2. In each circle, a Speaker will be elected by the assembly. The Speaker is required to hold discussions in a spirit of openness and brotherhood. He should remain neutral in action and in words.
9.3. In each circle, the Speaker will be supported by no more than two Reporters elected by the assembly. They should represent the advice issued by the assembly.
9.4. Each circle will meet in assembly once in the spring and once in the autumn.
9.5. The Assemblies will discuss and share ideas, with serenity and openness of mind; they take their decisions by consensus.

9.6. The Representatives of the Circle will bring the words and actions taken in the assembly to the Council of Sages.

Service to the Grand Sage

10. In addition to serving the Zoraï people, Circles will be faithful to the Grand Sage, both politically and spiritually, because he holds the Grand Mask and is the hope of Ma-Duk. All discussion and action will therefore be made within this framework.

11. The First Circle (Exploration) will search for our lost brothers, and rebuild our people.

12. The Second Circle (Spirituality) will be responsible for finding our spiritual path.

12.1. The Second Circle will return to the path of wisdom, through meditation, contemplation of the miracles of Atys, the reflection on the words of the Kami, the search for ancient signs, and the mystic trance.
12.2. The second Circle will guide Zoraï newcomers and educate them in the way of the Kami.

13. The Third Circle (Defense) will be responsible for defending our territory against any threat to Zoraï people or Atys.

14. The Fourth Circle (Construction) will be responsible for development and reconstruction of our nation.

15. The Fifth Circle (Dynastic) will be responsible for the administration of the Witherings.

15.1 The Fifth Circle will carry out investigations and administer minor justice throughout the nation.

16. Embassy’s relations with other peoples are the responsibility of the Council of Sages.

16.1. Foreigners may contact Representatives of Circles at any time, then the Representatives of the Five Circles can meet to decide on a common view, which they will propose to the Council.
16.2. In exceptional cases, foreigners may become an honorary member, they will then sit as and even vote if necessary. To become an honorary member, the nomination of a non-Zoraï Homin must be supported by the testimony of twelve Zoraï sponsors. Then, his nomination must be approved unanimously by the representatives of the Circles.

Retrieved from "https://en.wiki.ryzom.com/w/index.php?title=Zoraï_Government&oldid=27598"
Categories:
Hidden categories:
This page was last edited on 10 October 2018, at 11:27.